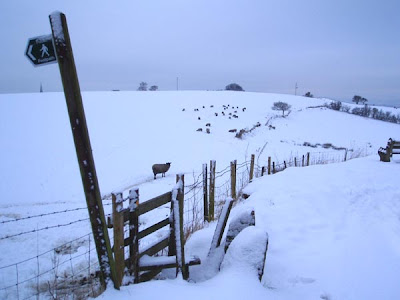 Only the second in my own memory; my first was, I think, in 1966, and I can fix the date because That Darn Cat was playing at the Princes Cinema in Monton and the snow-covered marquee features in the first roll of film I shot with my Christmas present, a Regula 35mm camera. I spotted a cat on the cinema’s steps, and was inspired to my first attempt at visual irony.

(Gimme a break. I was twelve. One of our two art teachers at Eccles Grammar School had started a photography club that year, and showed he’d shown us how to develop and print our own negatives in the poky darkroom at the back of the freezing pottery workshop in the girls’ playground. I think it was Mr Chapman, rather than Mr Connolly; teachers didn’t have first names back in 1966.)

I believe it was ’66 rather than ’65, which is the official release year for the Disney movie, because back then it was usual for the UK to get sight of a new film as much as a year after the US. And the Princes was only a little local cinema, not one of the first-run houses. It was a classic ‘Smallest Show on Earth’ place, managed by a husband-and-wife team whose quiet dedication to their calling I’m only now able to appreciate. They ran a kids’ Saturday matinee that was like a zoo during an earthquake. He wore a suit and dickie-bow and ran the front-of-house; she had one of those ’60s piled-high hairdos and sold the tickets.

During the pop explosion of the early 60s the kids’ matinee would feature a spot from a local band; I’d love to tell you that I witnessed the start of some big-name supergroup but the only one I remember clearly was Ken and the Combines. The Combines stumbled their way through a Ventures-style instrumental by way of a buildup, followed by the offstage announcement, “And now… the moment you’ve all been waiting for… It’s Ken!” Ken ran out to embrace his moment of glory with such enthusiasm that he yanked the microphone lead out of his amp and appeared to mime silently throughout his number.

I reckon that the Princes (not ‘The Princess’, as many called it) was as important a part of my education as the Grammar school. I remember when Midnight Cowboy played there, going back every night for a week and dragging my parents along on the Friday.

It’s gone, of course. There are houses there now. They did the same with the Grammar School, closing and demolishing it the year after I left. I hope that was a coincidence. Maybe they waited until I’d gone and then sowed the ground with salt.

According to the Met Office, it’s not a real White Christmas unless the snow actually falls on the 25th. Snow lying from the previous day doesn’t count.

But if I listened to the Met Office, I’d have no White Christmases at all.