It’s thanks to my old friend Bryan Talbot that I could legitimately put ‘model’ on my CV, if I were so inclined… back when he was living in Preston and creating The Tale of One Bad Rat, Bryan pressed my entire family into service to help with the photoreference for some of the frames. That’s me, the dodgy salesman who tries it on with Helen Potter and succeeds only in wrecking his car, the red 480 that I was driving at the time. My wife sat in for the adult Helen and my daughter posed as Helen-in-childhood. I’m the only one out of the three of us who’s recognisable… which makes it rather a shame that these were my moustache-and-mullet days. 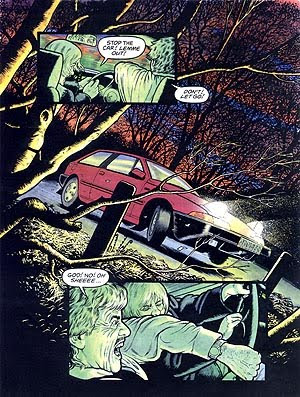 Not a bad souvenir of that time in our lives, though.

Now a mailout from the British Fantasy Society tells me that Bryan will be joining Garry Kilworth and Lisa Tuttle as a guest of honour at this year’s Fantasycon in September. Here’s what they say:

Bryan Talbot has produced underground and alternative comics, notably Brainstorm!, science fiction and superhero stories such as Judge Dredd, Nemesis the Warlock, Teknophage, The Nazz and Batman: Legends of the Dark Knight.

He’s worked on DC Vertigo titles including Hellblazer, Sandman, The Dreaming and Fables and has written and drawn the graphic novels for which he is best known: The Adventures of Luther Arkwright, Heart of Empire, The Tale of One Bad Rat, Alice in Sunderland and Grandville.

For more on all of that, Bryan’s site is here.