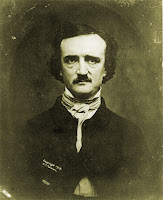 Thanks to Stephen Volk for a reminder that tomorrow marks the bicentenary of the birth of Edgar Allan Poe. Doesn’t matter which way you come at it, whether you see him as a giant of American literature or one of the key figures in a beloved genre, Edgar Allan Poe was The Business.

As with many a true artist, you may envy the man’s achievement but you wouldn’t want his life. His aim was to be a man of letters, not a master of the macabre. But his was a dark talent, that fed upon the negativity, conflict and disappointments of human existence and made from them something that is simultaneously grim and glorious. Loved ones suffered and died, his ventures mostly failed, and even after death his reputation suffered when an embittered rival managed to gain control of his literary estate; succeeding only, in the end, in contributing to the writer’s growing legend.

Poe moved around throughout his life, and museums and memorials have sprung up in his wake like the Children of the Hydra’s Teeth. One such stands on Seventh Street in the Spring Garden district of North Philadelphia.

We paid a family visit there during a follow-up trip to research my Philadelphia-set novel Red, Red Robin. I’d done the bulk of the work during a solo visit the previous year, and this time around there was less pressure and a chance for some sightseeing. 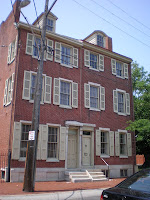 Unfurnished and stripped back to the bare materials, the Spring Garden house works in a way that recreated or restored properties often don’t; the imaginative path from now to then is shortened, not cluttered, and the bare-bones presentation has an air of truth. Though there’s no way of determining exactly which of his works were written during Poe’s time as a tenant – one year out of the six or seven he spent in Philadelphia – the layout of the cellar strongly suggests a link to The Black Cat, and the story’s publication date supports this.

As our tour party of a dozen or so stood in the cellar, our Ranger guide launched into a from-memory recitation of The Tell-Tale Heart and did it pretty well, too, with captivating gusto.

After the tour, as we wandered freely through the empty rooms on the upper floors, my daughter stepped on a loose board. The board lifted – and there beneath it, in the space between the joists, lay a large, realistic, red rubber heart.