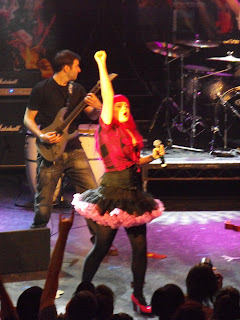 Well, there was an upside to the delay in getting my visa.

It meant that I was in London for long enough to catch my daughter’s grad show at the Shepherd’s Bush Empire – and on Father’s Day, too.

It was a great gig with lots of talent all round, and seriously well-attended. I stood behind Hank Marvin in the line outside. Here’s a shot of Ellen in an Aerosmith medley. Clearly not enjoying herself at all.

It was loud and full of energy and it got the balcony on their feet. The debris on the stage is the remains of a ukelele, smashed a few seconds before by the guitarist.