My Own First Film…

…was on Standard 8mm and held together with sticky tape. As a logistical exercise it had a certain magnificence, for which I can take no credit at all. As a piece of filmmaking it’s barely watchable, which is entirely down to me.

But as a formative experience… priceless.

It was August 1974. Three of us set out with backpacks and a camera to get documentary footage on the history of theatre-building in Europe. Pat Monks was, like me, a second-year student at Hull University. We were on the Joint Honours, Drama and English course. Norm Randall was Sociology, but he’d taken a drama option in his first year and and it was there that we’d hatched our plan. 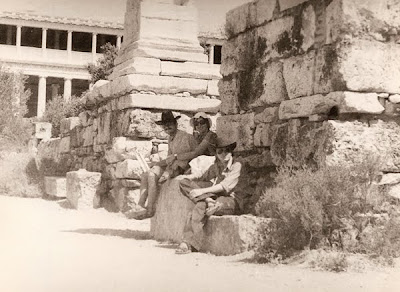 Hull’s drama department wasn’t some soft option where performer wannabees paint scenery and learn to juggle. There was a certain amount of fannying around in tights but at the heart of it was a solid academic study of theatre’s social, anthropological and practical history. We started with Aeschylus and, over the three years, took it all the way to the (then) present day with the ‘poor theatre’ that was taking place in basements and back-rooms behind the Iron Curtain. Along the way we put on shows, learned the basics of lighting and stage management… the only one of us I recall painting scenery was Tim Reed, but that was his thing, and he went on to make an international career of it.

Norm and I got the ball rolling early in ’73 and recruited Pat somewhere along the way. Our aim was to get to film as many of the key European sites as we could, covering the centuries from the Greek theatre at Epidaurus to the Bayreuth Opera House. We produced a prospectus, got the patronage of Lord Clark and Sir Alec Guinness (don’t ask me how), and raised about eight hundred quid. It was enough to cover film, ferries, Interrail tickets, hostels and food. At 24, Norm was the grownup of the party. Given some of the giggles we had, I hesitate to say mature – Pat was younger but she was almost certainly the mature one. I was 19 and didn’t have much of a clue about anything.

The camera was a Russian wind-up Quarz 5 that I found for fifteen quid in a second-hand shop on Anlaby Road. It was a thing of robust beauty and it weighed as much as a small car. I think the Soviets must have engineered their cameras out of White Dwarf Star metal. Ours ran wonderfully in all tests and broke down as soon as we hit France. The clutch on the take-up spool failed, which meant that exposed film would wodge up inside the camera body until it jammed. Wherever we went, I had to find a light-tight wardrobe that I could climb inside as a makeshift darkroom, to fix it without ruining what we had. Norm or Pat would have to hold the door closed in case I elbowed it open.

We started in the South of France with the magnificent Roman arenas in Nimes and Arles, where the brutal Van Gogh sunshine gave us guys an excuse to buy cowboy hats. It was at the awesome Roman theatre of Orange that I got my first taste of what was to become a major feature of my chosen life, which is the opportunity to cross barriers and mooch around behind the scenes. In Vicenza’s Teatro Olympico I got to stand on its famous forced-perspective stage; in the Teatro Farnese the only visitors were the three of us and the Duke of Parma, down at the far end checking out his real estate.

It was in Delphi that we rolled in late, found the Youth Hostel full, and ended up sleeping on its roof. I woke to a magnificent sunrise and the realisation that I was about six inches away from a three-storey drop into the alley. Leaving Delphi was even trickier than getting in; it was in August ’74 that Turkey landed an invasion force on Cyprus and the Greek army was mobilised overnight. We camped on the station platform for two days watching the troop transports going through, and finally hitched a ride in a cattle car with half a dozen civilian conscripts on their way to their mustering point at Thessaloniki, who insisted on sharing their food with us. At Thessaloniki we got the last, overcrowded train out to Vienna; two and a half days on the move spent dossing in the corridor as we crossed what was then Yugoslavia.

My main memory of Yugoslavia is of the kids who lined up along the embankments to wave, and then when we waved back they stoned the train. We reached Vienna tired and filthy, with nowhere to stay. Our contact there was Paul Stefanek of the Institut fur Theaterwissenschaft, based in the Hofburg Palace at the other end from the Spanish Riding School. Friendly, diffident, and an absolute hero, Paul gave us the gigantic palace key and we slept that night on the Institut floor, after inadvertently dining in a nearby brothel. The palace rooms were magnificent but the facilities were few; we took turns getting clean at a tiny kitchen sink with an Ascot water heater. To demonstrate my new-found maturity I put my anorak hood on my head and ran through the Hofburg in my underpants, as Batman. The final week of the journey, taking us through Salzburg, Munich and Bayreuth, was uneventful by comparison.

And the film? Ah, the film was a shambles. I shot as much as I could and I used everything I shot. But it looked great on my CV and since no prospective employer could be arsed to go to the trouble it would have taken to arrange a viewing, I was never found out.

4 responses to “My Own First Film…”