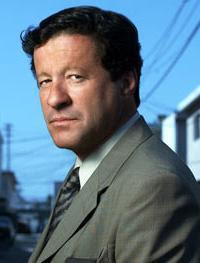 Channel Five have been running Crusoe episodes every day throughout the holidays.

Despite any initial reservations, now that I’ve seen how they play I think it’s been a good piece of scheduling. The show makes good, old-fashioned holiday fare.

The first hour of my 2-part finale went out today… one regret I have is that in amongst all the credits there’s none for Crusoe’s true begetter. Despite the expansions, additions and adjustments that we made – I used to joke that if we could only harness the energy, we could power the generators from Defoe spinning in his grave – he has a greater presence in the show than an observer might imagine. Most of the ‘re-imagined’ details of Crusoe’s backstory are, in fact, drawn directly from his creator’s own life.

The final episode airs tomorrow, January 2nd. To conclude the series, I wrote a closing scene which ties the world of series to that of the novel. We shot it, but it didn’t make the cut. But at least my conscience is clear.

INT. THIRD TAVERN ROOM. NIGHT.
Santana (the Spaniard who has sworn to return and rescue Crusoe, played by Joaquim de Almeida) is telling his usual tale to a man who is scribbling notes onto an array of handbills and scrap paper.

SANTANA
It is a tale of pirates, treasure and mutineers, and cannibals and heroes.

DEFOE
(scribbling away)
This is all wonderful.

SANTANA
And I give thanks that you can open your heart and believe it. For I’ve met no one else who will. How long will it take us to prepare for the voyage?

The scribbler looks up.

DEFOE (CONT’D)
Did I actually say anything about getting you a ship? I just write stories. I thought you understood that. I can get a great one out of this.

Santana slumps, and covers his eyes.

He waves him away. Glancing around guiltily, Defoe quickly gathers all his scraps and scribbles together.