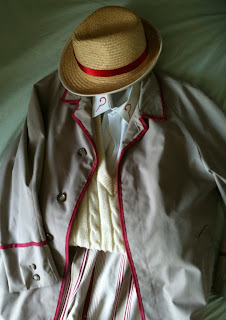 A lightning strike on Brooligan Village has knocked out phones and broadband for the past ten days, which has put a crimp on my blogging and tweeting while forcing me to get some actual work done.

But here’s where I’ll be later this week. I have tickets for A Hero’s Journey, an hour-long comedy playing from Wednesday to Friday in the Camden Fringe. It features the internal struggles of an embittered washed-up Doctor Who writer, and keep your smart remarks to yourself.

The lead character’s a creative writing teacher with one professional credit – a pretentious Who spinoff novel (To Whit, a Dalek) – and an enormous chip on his shoulder. To be honest, he sounds like what we’d call around here, “a right arse”. His angst follows him around in the form of a bad-angel version of the fifth Doctor. Imagine Play it Again, Sam with the Doc in place of Bogart, and you’re probably halfway there.

The two writers are fans of the show, so we should be on safe ground. I know of at least three other former Who scribes who’ll be in attendance, so an element of nervous hysteria amongst the audience is guaranteed.

Do I have any connection with the project? Kind of… the Associate Producer is @Audreydeuxpink, whom I’ll probably have to disown when it’s all over.

A Hero’s Journey is by Stephen Jordan and Patrick Baker, at the Etcetera Theatre (above the Oxford Arms pub) on Camden High Street from August 17-19 at 7.30pm. Tickets are £8, available from Ticketweb and, I imagine, at the door.

4 responses to “A Hero’s Journey”