Die Hard, in a Castle

When I was sixteen and ‘doing’ Shakespeare’s Hamlet for A Level English Lit, our English teacher Roy Bateman took the class to a screening of Grigori Kosintsev’s Russian-language film version of the play. It was only a scratchy 16mm print in a regional film theatre, but it blew me away.

For me it became the definitive reading of the material and I’ve never seen another version to touch it, before or since. If I had to say one negative thing it would be that Innokenti Smoktunovsky was maybe a tad old for the lead, but then I’ve never seen an actor playing Hamlet who wasn’t. Everything else is perfect. And he’s perfect, too. Just half a dozen years earlier and he’d have been even more perfect.

Hamlet was included in their release programme. I waited until it became available and then, with some trepidation, placed an order and gave my credit card details to Moscow.

And here’s how it came: 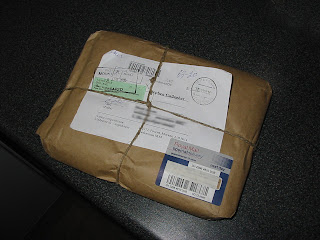 Yes, in a brown paper package all tied up with string. So cute that I had to make a photographic record before I could bring myself to open it.

The film lived up to the memory and I still recommend it unreservedly. Amazing settings, atmosphere, black and white widescreen photography, and music by Dmitri Shostakovich. Since my little Moscow adventure it’s been licensed for release in the US and can be had from Amazon.

The fact that it’s in Russian with English subtitles matters not at all. The point is to render Shakespearean thought and imagery in cinematic terms, and Kosintzev & co nail it.