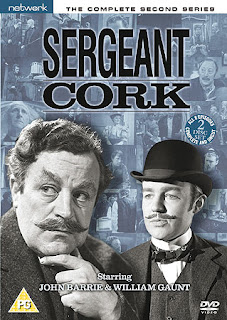 After losing stock and technical assets in the Sony warehouse fire during the Enfield riots, it’s good to see Network DVD up and running again. And also happy to see the release of a second season of the Victorian CID detective drama Sergeant Cork, currently offered as a ‘web exclusive’ title.

If you’re interested, don’t hang about. For reasons not explained on the Network site, “This title will only be available until 9 March 2012.“

Rights expiry? Making way for a two-season boxed set? If I find out, I’ll let you know.

Though 16mm telerecordings give us a relatively low-res record of classic studio TV, it’s the tight, character-driven writing and classy, nuanced performances that make Sergeant Cork worth the present-day viewer’s time. The odd, rare mistake on the studio floor (remembering a character’s mid-scene moustache failure in season one!) makes you appreciate the high level of theatrical and technical craft that went into a weekly hour of live TV drama.

Don’t get me wrong, I don’t want to go back; and live TV certainly isn’t a medium I’d care to write for. It was a theatrical form that imitated the form of film, without access to most of its grammar. Those who pushed the medium most also went furthest in exposing its limitations.

Btw, opportunist dealers on Amazon will offer to sell you the second season for fifty quid. Network will sell it to you for fifteen.