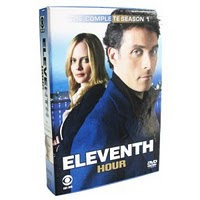 One of the bootleg Eleventh Hour boxed sets has come my way. I won’t say how – it’s not a trade I’m here to encourage – but it wasn’t difficult to get hold of. At first glance the Chinese DVD packaging is way more attractive than the ‘official’ version, though on closer inspection it’s hilarious. There are logos for CBS, Paramount Studios and the Showtime cable network, a long rambling blurb than conflates the stories from three different episodes, small print in Engrish, and a copyright notice that reads DEXTER (TM). They just cut and paste this stuff so it looks right from a distance, the way that the aliens put together Dave Bowman’s apartment in Arthur C Clarke’s 2001 novel.

(In the novel, Bowman takes down a book from the shelf and the pages are all slightly out of focus. Brilliant detail.)

When I put any one of the discs in my player, it rattles like a saucepan lid. Still works, though. After two separate copyright theft warnings, from Interpol and the FBI (nice touch!), up comes… the Twentieth Century Fox movie logo and fanfare.

Which means that one way or another they seem to name-check almost every random studio except for Warner Bros, the studio that actually made the show.

The box, which has a nice matt finish with classy part-laminated images, also promises Dolby sound (no) and a Spanish language track (there isn’t). The menus on the discs have a home-made look, but they’re kind of pleasing.

And what of the episodes? I assumed that they’d be ripped and stolen from the Warner Archive release, but they aren’t. All the shows are recorded straight from TV.

In fact they’re probably the torrented versions that appeared online within hours of the original broadcasts. They’re widescreen but they’re heavily compressed and nowhere near Hi Def. When you play an episode, it has the CBS ‘eye’ logo in the corner of the screen – the ad breaks have been cut out but midway through you get flashed-up promos for other shows. Someone’s added switchable subtitle tracks in English and two forms of Chinese.

Worth having? Nah. Keep your money and stay legal. It’s barely a step up from a movie stolen by camcorder and if you’re stupid enough to sit through one of those, consider yourself banned from the blog. You probably think that date-expired seafood is a great bargain. I inadvertently bought something like this once before, when I bid on the first season of Carnivale on eBay, thinking it was the real thing. All it did was persuade me to go to Amazon and pay all over again.

But that box, though – love that box.