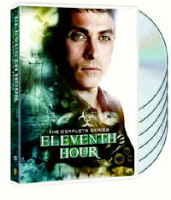 Danny Cannon dropped by my office this morning and mentioned that the Eleventh Hour DVD boxed set is now scheduled for October 2009 release.

Danny’s had a hand in the presentation and the quality specs, so technically the set should be well up to snuff.

I Googled to see if any public announcement had been made before mentioning it here, as I’m not in the business of breaking confidences, only to find that it’s been on Warners’ own DVD site for a few days already. According to TV Shows on DVD, pre-orders will ship on October 20th but here’s an odd thing… if their information’s accurate, the discs won’t be available in stores but sold online-only as ‘manufacture-on-demand’ under the Warners Archive program.

Make of that what you will. In the course of the day it’s been suggested to me that healthy sales may lead to a wider release with extras, commentaries and the like. Warners know that I’m up for a contribution if they want to call on me.

6 responses to “Eleventh Hour on DVD”