All eighteen episodes, from Resurrection to Medea. 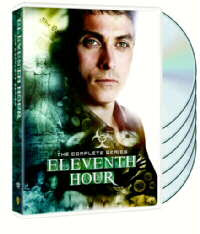 Acclaimed film and television producer Jerry Bruckheimer (Pirates of the Caribbean, CSI) is back again in the nick of time with… ELEVENTH HOUR. Starring Rufus Sewell as Dr. Jacob Hood, a brilliant biophysicist and special science advisor to the government, the series follows the enigmatic doctor as he investigates scientific crises and oddities – everything from cloning to cryogenics. With absolute jurisdiction and a resolute pursuit of those who would abuse and misuse scientific discoveries and breakthroughs for their own gain, (Hood) is called in at the eleventh hour as the last line of defense. Marley Shelton co-stars as Special Agent Rachel Young, the decorated FBI protection officer assigned to watch his back. Based on the British miniseries by acclaimed writer Stephen Gallagher, the series follows this unlikely pair as they crusade to protect the substance of science from those with nefarious motives.

Available only from WBShop.com, the online store of Warner Bros Studios. If you do buy the set, why not go back to the site and give it a review and some stars?

3 responses to “Look What Ships Today”