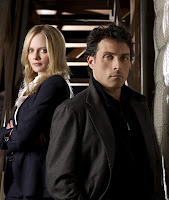 CBS online have dropped Eleventh Hour from the shows listed on their site and closed the fan forum, but the fanac has relocated to Planet Hood, a dedicated site with a new forum that pretty much picks up where the old threads left off.

From the way they’ve laid out the stall, it looks as if they’re planning to work it up into a resource for info on the episodes. For now it’s the place to go if you want to vent some feelings, share some opinions, or even join in with the resurrection campaign.

I see from a Google that there’s also the Wiki-based 11thHourShow.org, with character quotes and episode summaries and pix I haven’t seen elsewhere.

No, I didn’t foster or encourage any of this, although obviously I’m sympathetic to the campaign’s aims. From its inception this show has given me some of my worst and some of my best experiences working in TV, and it had finally reached a place where what I’d wanted and what I was getting were one and the same. Who wouldn’t want to see that continue?