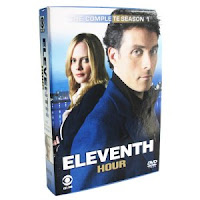 No, don’t get excited. That isn’t the cover of a genuine Eleventh Hour mass-market edition. It’s the Chinese bootleg – at least, I’m assuming it’s a bootleg, unless fractured English and a Showtime logo on the back of the sleeve are the mark of an official release.

A couple of days ago I got an email from Amazon to tell me that the Eleventh Hour DVD set – the official set, the Warner Bros one – was now available. Fine, I thought, a couple of months late, but better than never. I clicked on the link, and… “This item has been discontinued by the manufacturer”.

You’d think I’d be in the loop on all this stuff, but I’m not. So I don’t know why Amazon advertised and then pulled the product (it’s still available from the Warner Bros online store), or why they’ve deleted about 20 five-star reviews.

Maybe Warners couldn’t cope with the demand – the discs are DVD-R, and they burn them to order.

But the Chinese are having no such problem; wholesalers are stacking them high and shifting them for about ten US dollars a set, all regions.

I’m not recommending them – these are pirated copies, and along with the ethical issues you run the risk of getting poor goods. But I’ve always held that the most effective way to beat piracy is to outmarket the pirates.

By the look of it, we’ve some catching up to do.