If there’s any movie that comes a close second to Jason and the Argonauts in terms of the money that I’ve shelled out to own copies of it, this low-budget hand-made horror from the ‘sixties must surely be the one.

I saw Carnival of Souls as the lower half of a Sunday horror double-bill at the Princes Cinema, Monton, sometime around 1970 or ’71. It marked me for life. I don’t mean in a traumatic way, although I’m sure that a susceptible mind could find its combination of archetypal nightmare images and plain style genuinely disturbing.

No: I was gripped by the way that it seemed to strike a succession of clear notes in my subconscious. It was like mainlining essence of macabre. There’s a misconception that horror in art is concerned with disgust; when in fact, done well, it produces a deep-reaching and peculiar form of delight.

The movie was released in 1962 and was made by a bunch of Kansas filmmakers with a background in corporate and industrial documentaries. Herk Harvey directed, John Clifford scripted. They raised money from local businesses and pressed friends and family into service both in front of and behind the camera. But for their lead they hired a professional actress with a small handful of TV and B-movie credits, Candace Hilligoss, and struck lucky with her Summer Glau-like air of uninflected weirdness. Frankly, with someone more expensive the film might not have worked half so well.

It starts with a road race that ends in disaster, with a carload of friends running off a bridge and into the river. Alone from the water staggers Mary Henry (Hilligoss) in the first of the film’s many memorable images; mud-splattered sole survivor of a mass drowning, she cleans up and goes on to take up a job as a church organist in Salt Lake City. There she finds herself becoming steadily more detached from the world around her. When she’s not playing the Devil’s music or struggling to be noticed in a silenced town centre, she’s being haunted by a doleful apparition of a corpse-faced man. The apparition eventually leads her to a deserted lakeside pavilion, where the dead waltz and welcome their own.

In its making and in its achievement, I tend to think of it as a counterpoint to George Romero’s Night of the Living Dead. Both films were made outside the Hollywood system by people with a skill base in bread-and-butter, non-theatrical regional filmmaking. Both films managed, by their very lack of conventional artifice, to strike directly at the viewer’s unconscious. I regard Carnival of Souls as the Jung to Living Dead‘s Freud.

Both films also had an equally rocky time in the marketplace, and left their makers similarly unrewarded. In my part of the UK, Carnival played that one night at the Princes’ and it never showed up on TV. But boy, did it stay with me. 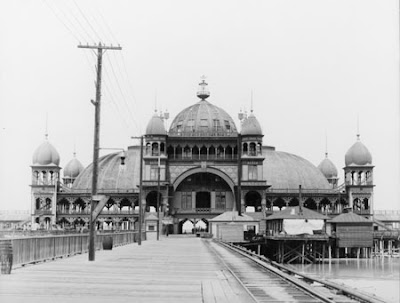 A few years later, when VHS had got itself established, I imported an NTSC copy from Sinister Cinema and paid to have it converted to PAL at a London facilities house. I shudder to think what it must have cost me. The tape itself was cheap, but the conversion was at industry rates. The quality wasn’t great either; it was one of many variant versions of the movie floating around, all from different sources. According to Englewood Entertainment‘s Wade Williams, “This picture was sold outright worldwide – state rights for perpetuity. They sold rights for the life of the print. Anybody that bought them could change the title, they could do about anything they wanted to exploit them.“

When a decent PAL VHS version came out shortly afterwards, I was convinced that all my trouble in securing and converting a copy had served as an act of sympathetic magic to bring it about. I upgraded anyway and it looked so much better.

After that I upgraded again, to the Criterion DVD. Yep, Criterion. In a restored and properly mastered print, offered in two versions, with commentary from Clifford and Harvey and a comprehensive overview of the rest of their oeuvre… such classics as Signals – Read ’em or Weep and (ahem) To Touch a Child (it’s about education).

I reckoned that after the Criterion treatment, there was nowhere further to go. Every now and again I’d see the movie offered cheap (or, in one case, given away on the cover of a magazine), but I knew that these would be crappy versions sourced from old prints and that what I had was now definitive.

But now next month, Network are releasing a new region 2 DVD. I don’t know where their print material is sourced from, but I do know that it carries a new commentary track from savvy horror stalwarts Stephen Jones and Kim Newman.

It never ends, I tell you…

12 responses to “Carnival of Souls”