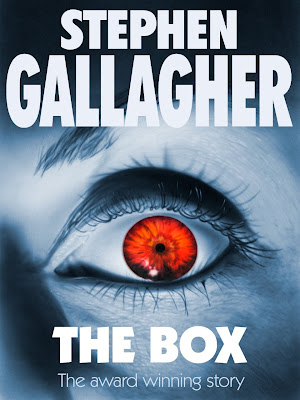 New to the Kindle and priced as low as they’ll let me, an e-book containing two pieces of my short fiction that appear in neither of my collections.

The Box is the story of a haunted aircrash simulator and of war heroes in peacetime retraining. Eels is… well, the title alone should give you some kind of idea.

The Box was written for a loosely-themed hardcover anthology titled Retro Pulp Tales, edited by Joe R Lansdale. In the year of its publication it won me an award, my second ever. It was for Outstanding Achievement in Horror and Dark Fantasy: Short Fiction and it was presented by the International Horror Guild at the World Fantasy Convention at Saratoga Springs.

Eels was written on request for a special edition of PS Publishing’s Postscripts magazine. Most of my short stories were written between bigger projects, as a way to decompress. It took me a while to raise the nerve to tackle the short form; it’s hard. It calls for steady-handed precision work, with no room for indulgence or error. A short story works, or it doesn’t. There’s no covering up with jokes, action, or atmosphere.

Out of his Mind, my first short fiction collection, is now available in a Kindle edition, along with some of my early backlist titles – Chimera, on which was based the ITV miniseries with John Lynch, Scandinavian supernatural suspenser Follower, nightmare chase thriller Oktober, and police revenge drama Down River. The Painted Bride is the story of Molly Gideon, ex-junkie, unlikely Guardian Angel to her dead sister’s children.

6 responses to “The Box”