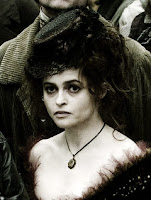 So, the Bafta results are out. Read ’em here.

But don’t expect to see Sweeney Todd much represented, and don’t take that as an critique of its quality. Despite being (in my humble opinion) one of the top of this year’s crop, a dark masterpiece with a superbly sweet and sad turn from Helena Bonham Carter, its release so late in the qualifying period is bound to have kept it off the radar of many voters. True, the distributors put on a number of member screenings just before Christmas, but most were in central London and many of those were during working hours. And the great thing about the Baftas is, they’re mainly voted by industry pros.

For anyone who’s interested in how the awards process works: it started in early December when notice went out that this year’s voting applet was available for downloading. Up to that point I thought I’d been keeping up pretty well with the year’s releases but as soon as I saw the list of eligible titles, I knew I had some serious catching-up to do.

Screeners started hitting the mat soon after. In the first round of voting, you can make up to a dozen nominations in each craft and performance category. Nobody can see everything but if everybody chooses by their own lights and pushes their personal boundaries a bit then a credible shortlist ought to emerge. For some categories there are also ‘chapters’, juries who can add to the shortlists in areas of membership ignorance.

All voting takes place online. When the shortlist is announced a few days later, I always try to make sure that I’ve seen every movie on it before voting again. That round produces the list of nominees, the people who sweat with the TV cameras on them as the gold envelope is opened.

I don’t know how the Oscar process works but I imagine it’s something similar. The Oscars are treated like some ultimate standard of deep worth, like God has peeped into each movie’s soul and issued the final word on its value. But they’re basically a poll of opinion amongst people who work in the industry and pay their academy subs.

I can’t speak for anyone else, but I take my Bafta voting really seriously. I see it as a chance to exercise my own judgement, not to confirm the anointed. And I seem to be pretty good at anticipating the winners; my ‘hit rate’ over the past four or five years seems to have been a fairly consistent 70%.

For example; Marion Cotillard was described as a ‘surprise winner’ in the Best Actress category. Not to me.

Her Edith Piaf biopic La Vie en Rose isn’t what I’d call a great movie. It’s one of those life histories that shovels on the misery with the energy of a stoker on a speeding train – I know it’s all true, but cramming it all into two hours is a dangerous business. Genuine tragedy risks a descent into bathos.

But the whole thing is held together by Cotillard’s astonishing performance. The only comparison I can think of is de Niro in Raging Bull, and he didn’t sing; Cotillard mimes to recordings of the later Piaf but supplies her own voice for the earlier numbers, and there’s no visible join.

The screenplay follows a pattern that seems to have become de rigeur for biopics; start at the peak, flash back to the beginning, a fantasy sequence or two along the way, go out on some well-known moment of triumph.

If I noticed a trend this year it was toward narratives that unravel rather than conclude, and thus purport to be ‘more like life’. I’m not saying that I demand pat solutions but if someone’s going to insist on telling me a story, I listen because I’m expecting them to make a point with it.

I don’t always get it right. When I saw Before the Devil Knows You’re Dead I immediately added Sidney Lumet to my Best Director noms list. Ditto with Hoffman (Philip Seymour, not Dustin) and Marisa Tomei for best actor and supporting actress.

But the true standout film for me was German Stasi thriller The Lives of Others – touching, tragic, scary, realistic, suspenseful, beautifully acted and shot, and quietly educative. And it has a proper ending! But it’s also a ‘foreign language film’, which means it’ll always get nods, but never the scale of nod it deserves.

I wanted to say something about the Kenneth Branagh remake of Sleuth, but I’ll just say this: don’t go.

4 responses to “Yo Bafta”