Of Girls, Swedes, and Dragon Tattoos 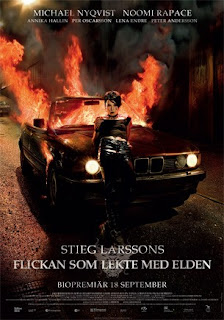 If you’re interested and you get the chance, try to see Niels Arden Oplev’s Swedish-language version of The Girl with the Dragon Tattoo before you hear much more about the planned David Fincher remake. That first adaptation isn’t a perfect movie by any means, but as screen mysteries go it’s a very good one. A nicely paced Euro-thriller, crisply photographed, immaculately cast, with actors that are more fascinating than beautiful.

There’s the thing… all credit to Fincher for keeping the story in its Swedish setting, but you only have to observe the casting process to get a sense of how the ground shifts when Hollywood reprocesses success. Gym-toned Daniel Craig in place of pie-fed Michael Nyqvist (if Nyqvist ever set foot in a gym, he was probably there to install the carpets), age-defying Robin Wright for ageing-gracefully Lena Endre… I’ve never seen Rooney Mara (Fincher’s choice for Lisbeth Salander) in action, but by her stills she’s more pretty than she is odd.

(And by the way, that rich old guy at the beginning of Oplev’s movie… that’s Sven Bertil-Taube, that is, powerboat hero of 1971’s Puppet on a Chain.)

Fincher will most likely do good work but there’s definitely something in the original that you’re never gonna get. The cinematic equivalent of a fine Continental beer that’s ‘brewed under license in the UK’. The Swedish film is an indie movie with a commercial aesthetic; Hollywood is going about its version in the only way it knows how, infusing a commercial film with an indie vibe. If you want to taste the original, then now’s the time. It won’t taste the same later.

I cannot, alas, be quite so positive about Daniel Alfredson’s follow-up movie The Girl Who Played with Fire; most of the cast and the production standards are the same, but the material is decidedly inferior. Nice poster art, though.