I was thinking about writing a blog post on my trickiest-ever script assignment, and was scrolling through the news section of my old website trying to locate a particular item when I came across this review of The Painted Bride from The Washington Times.

The Painted Bride (Subterranean Press, $40, 181 pages) is veteran thriller-writer Stephen Gallagher’s tense melodrama spun from the mysterious disappearance of auto dealer Frank Tanner’s wife Carol, the stalled police investigation into Frank’s possible guilt – and the complications ensuing from the obsessive actions of Carol’s burnt-out, former drug-taking younger sister Molly, who knows Frank did away with his wife, and devotes her dwindling energies to protecting the children now in his care and bringing him to justice.

Mr. Gallagher expertly shifts among several characters’ frazzled viewpoints, detailing the progress of Molly’s “investigation” and Frank’s suspicious evasive actions in crisp, quick scenes, making chilling use of a child’s drawing of a woman in a red dress (“the painted bride”), leading toward a series of violent climaxes at a seaside ferry terminal, where crucial secrets are unearthed – and the paradoxical image of the nurturing parent as murdering monster is finally engaged and explained.

There’s even a hint of the supernatural in an endangered child’s anguished outcry… It’s a neat capstone to an accomplished and suitably unpleasant shocker. 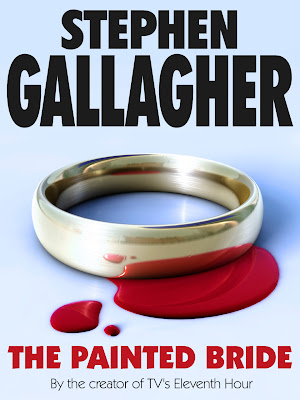 The print edition sold out and I’ve now priced it as the cheapest of my Kindle titles… if you got a device for Christmas and you’ve already downloaded all the free classics from Project Gutenberg (and why wouldn’t you?), then you might want to give it a go.

(In England that’s what we call a ‘hard sell’)