“Doc would listen to any kind of nonsense and change it for you into a kind of wisdom. His mind had no horizon and his sympathy had no warp.”

When I was fifteen, I thought that writing couldn’t get any better than John Steinbeck’s Cannery Row. I thought that no ensemble could ever be sketched with so light a touch as the amiable drifters who rent the run-down Abbeville place from Lee Chong’s Grocery. I also thought that there could be no more rounded a portrait of human decency than that of Doc, owner and operator of the Western Biological Laboratory.

Doc was closely based on Steinbeck’s friend Ed Ricketts. His portrayal mingles affection and respect in equal measures. Doc holds no public office and makes very little money selling the specimens he collects, but everyone in Cannery Row looks up to him. Although far from a saint, he’s a natural teacher, an interested listener, a flawed romantic. Time in his company, I imagined, would be time well spent.

Do I still feel the same? Your tastes change with the years but, mostly, I think I do. A couple of years ago I was close to Monterey and I took the opportunity to stop by Cannery Row. 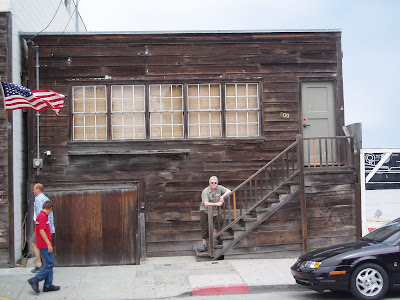 Yep, that’s me on the stairs. Right where it all happened. Or would have happened, if it hadn’t been fiction. If you know what I mean.

Cannery Row is for tourists now (some nice pictures and a description of a visit here), but Ricketts’ original marine laboratory building is still there.

It’s modest and shabby, and doesn’t it look exactly like you’d want it to look?

One response to “Characters that Stick”