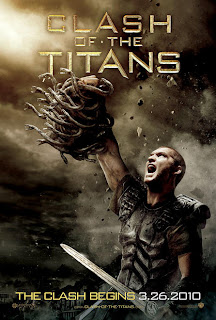 Two things to talk about, here. One, a movie I had some expectations for, the other a novel reminding me that literary fiction need not be the turnoff that so many literary novels have made it into. By which I mean the kind of literary novels you get when bad poets have access to too much paper.

Clash of the Titans. I finally got to see it. When I posted the trailer here sometime late last year, I thought it had the look of a promising romp. So WTF went wrong?

How do you screw up Clash of the Titans? It’s got a flying horse. It’s got a Gorgon. It’s got an effing Kraken, for God’s sake. It’s got an underdog hero and a cataclysmic love story and its Big Theme is nothing less than a standoff for dominance between Man and the gods. The guys get the most flattering wardrobe in all of human history, and the women the most feminised. All pleats and bare arms and classic hairstyling. Like a skin care ad set in heaven. Or a Dove commercial without the token fat one.

But… ay. So much action, and so little suspense. So many people just saying stuff, while you struggle to stay tuned in. So much sweeping camera movement that takes you nowhere and tells you nothing when you get there. A protagonist who neither responds to events nor directs them forward, but is just carried along to wherever the story needs him to be next. All the set-pieces were adequately done, but strung together it was like everything always turned into a battle. Perseus is a guy who can’t go to the fridge for a bottle of milk without having to fight off a horde of something-or-other. To me it felt like something written by gamers, where the main character is an empty vessel for the player, and the story objectives only matter to the extent that they give you somewhere to be heading for while shit falls out of the sky or bursts through the walls.

Some people in Hollywood make a big thing of ‘the hero’s journey’ because you can find it in Joseph Campbell’s book and someone on an expensive writing course once made them believe it was a secret key to something. The script appears to have been endlessly rehashed with the Hero’s Journey in mind and none of the versions did what it needed to do, which was simply to make it Perseus’s story. Not just by explaining to the audience what Perseus wants, but by making the audience want it too.

Last year I got a sneak of a late draft of the screenplay that Lawrence Kasdan had worked over, but I didn’t look at it then. Didn’t want to spoil what was coming. I looked at it after seeing the film, thinking that maybe here was one of those stories of decent writing trashed by unsympathetic development; but the narrative problems run deep into the film’s history, it seems. 12 pages in (all completely different from the movie) and you still haven’t met anyone to care about. Just try that in TV. 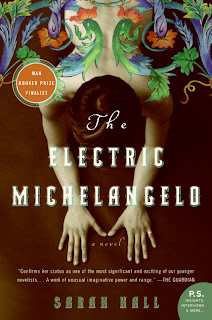 So a word now for Sarah Hall’s novel The Electric Michelangelo. Which you’d think would belong in an unrelated universe but since the universe in question is the one inside my head, I don’t see why they can’t go together.

It’s a long time since I picked up a Booker Prize contender that didn’t ultimately disappoint. I’m not saying there’s been nothing good out there, more that my inclination to sample has dwindled away. Life’s too short not to learn from your let-downs.

I’ve written before about ‘literary novel fade’, that phenomenon where you’re drawn in by Fine Writing only to realise that you’re in the hands of a stylist whose storytelling skills won’t carry them the distance. I’ve been caught by it quite a few times. So I don’t know what made me pick up The Electric Michelangelo.

Yes I do. It was the title, the milieu, and the few lines of clean strong prose that I sampled in the bookstore. I didn’t even notice the ‘Man Booker Prize Finalist’ endorsement until after I’d made my decision.

(Btw, for those outside the UK, the Man Booker Prize isn’t an award aimed only at men. There is a women-only literary award, called the Orange Prize for Fiction. Women can win the Man Booker Prize, and often do, but men don’t get a look in on the Orange. Which is a great for stoking an argument in the pub.)

Anyone familiar with my own back-catalogue will know that I’m a sucker for a windy seaside town in the off-season, for the atmosphere of carnivals, sideshows, and backstage theatrics. Add a whiff of bygone times to any of the above, and you’ve a good chance of getting my attention. HBO’s Carnivale, Nightmare Alley, The Illustrated Man, Tod Browning’s Freaks. May I also direct you to the late Tom Reamy’s brilliant Bradburyesque fantasy Blind Voices.

The Electric Michelangelo follows Cy Parks from a Morecambe childhood helping out in his mother’s guest house, through his apprenticeship to a fierce and complicated local tattooist, to the boardwalks of Brooklyn’s Coney Island in the 1920s where, working his trade under the name of The Electric Michelangelo, he meets Grace, a circus rider. You instinctively understand his fascination with Grace when you realise that, without any forced meaning, she embodies many of his life’s issues.

Some might compare it to Angela Carter’s Nights at the Circus, which I found disappointing. Michelangelo‘s feminist concerns are buried deep in the texture of the fiction, and instead of fading, Hall ramps it up for a satisfying final act. There’s retribution and deliverance, in a tone that’s either Gothic or Jacobean and I can’t make my mind up which.

But in my world, that’s a rather good choice to be given.

As ever in these matters, your mileage may vary.

4 responses to “Disappointments and Discoveries”