…if you’re stuck for something to do next weekend, the Mystery & Imagination Bookshop at 238 N. Brand Blvd in Glendale is having a signing/celebration for Ray Bradbury’s 89th Birthday on Saturday 22nd, August starting at 1:00pm.

When I last stopped by (some years back) they were still in the tiny premises around the corner on East Broadway so I don’t know what the new location – a few blocks down from where Warner Bros Feature Animation used to be – is like. More space for a start, obviously. Still, the owners are really great people. They were certainly happy when I bought a fine hb copy of Harlan’s Strange Wine for $75.

The heads-up info is much appreciated. As it happens I found the M&I on my very first night in LA, which confirms my belief in some kind of supernatural karma-driven radar – Steve Jones had mentioned it to me in an email but I wasn’t specifically looking for it, just doing that thing where you’ve landed and you’re tired and wired at the same time, so you go exploring.

My motel was right by the Americana Mall, which has sprung up complete in the past couple of years and isn’t a mall in the usual sense – that function’s served by the enormous Galleria Mall that all but adjoins it. The Americana is a bizarre open-air retro small-town square, style of Disney, feel of Futurama, with performing fountains and piped Tom Jones and Dean Martin from speakers hidden in the street furniture. Some Angelenos seem to hate it but for me… well, I clearly have debased tastes because I thouight it was fun, not least because of the way that its enormous Barnes & Noble – about six strides from my motel – stayed open until 11pm.

The new M&I premises are maybe a five-minute wander up the street, with stuff to look at along the way. I can’t say what the area was like before, but my impression is that North Brand has been given a boost by the development… maybe not a huge boost but it’s created that fringe of cheaper-renting premises where the more interesting businesses are always found. And though, for some reason, town planners never get this, it’s always those businesses – the stamp shops, the second-hand bookshops, the woman who makes her own jewellery, the bloke who fixes old watches – that make a place a destination.

The frontage looks like something out of a Bradbury or a Wells story. Once you’re inside, the stock goes way back deep into the building and there’s an upstairs room for readings and talks. And I got recognised! They asked me to add to their signature wall in the stairwell. I found a space and wrote big. I could barely get my ego out through the door afterwards.

I’m reaching a point now where the town feels like it’s opening up to me, and instead of seeking out tourist high-spots I’m beginning to find those quirky little pleasures that don’t need to feel like a ‘day out’. They just call for an hour here and there.

So this afternoon I’m heading for the long flight of steps in Silverlake, up which Laurel and Hardy made repeated attempts to lug a piano in The Music Box. Not only are the steps still there, but some devotee with time on his hands has scrutinised the footage and established from cracks in the concrete that they’re still the originals. Gonna walk ’em all, whistling and saying a silent thanks for hours of childhood pleasure.

And speaking of childhood pleasures, and while we’re under the Mystery and Imagination banner… Network DVD have released all the surviving episodes of the ’60s series of that name. It set an unmatched standard for television treatment of the supernatural and macabre.

While checking their website for the link I noticed that in September Network will be releasing the Ted Willis-created Sergeant Cork, which I remember as a hugely atmospheric Victorian procedural.

Laurel and Hardy on Bob Monkhouse’s Mad Movies, Sergeant Cork, Mystery and Imagination, The Avengers… my God. Is that what ITV Saturday nights used to be like? 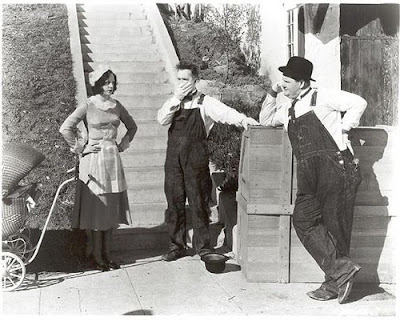 Well, I found it. I parked on Sunset Boulevard, just across from what appeared to be a strip club, a one-story windowless building with no name but a neon skunk for a sign. In the dark and with the sign lit, the skunk’s tail would be animated and would flicker back and forth. Pepe le Phew, perhaps? I have no idea.

The stairway begins about a hundred yards or so from Sunset. Where once it ran up a largely open hillside, it’s now lttle more than a narrow alley with properties right up against it on either side. First thing I saw was a toilet bowl which had been dumped, along with a pile of ruined old suitcases, just behind where the nursemaid is standing in the picture.

But f*** it. They’re the Music Box stairs! A blue civic signpost tells you so, top and bottom, and there’s a small plaque let into the lowermost step honouring L&H.

I climbed to the top. The stairs there end at a street of houses that seem to have been built on shifting ground — the sidewalks are buckling, the driveways are sagging, and perimeter walls are bursting outward under pressure from tree roots.

Of course, when I got up there I had that dorkish feeling. Because there was nothing for it but to check out the view and then turn around and go back down.

At which point I heard it – someone, no more than two or three houses away from the top of the steps – was practising the piano.

I didn’t take any shots. But I did find this YouTube video made by someone else.

5 responses to “Mystery and Imagination”