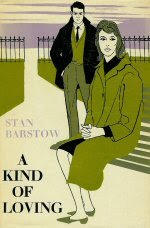 I’m sad to hear that novelist Stan Barstow has died at the age of 83. His Guardian obituary is here.

I served as Northern Chair of the Writers’ Guild for a couple of years more than a decade ago, and Stan and his parter Diana Griffiths were two of the most reliable regulars at our (often sparsely-attended) meetings above the Mitre Hotel behind Manchester Cathedral. I found them both warm and supportive, and Stan maybe a little shy; some found him taciturn, and I wonder of the shyness increased when Diana wasn’t around.

I liked both of them, a lot. I tracked down a first edition of A Kind of Loving with the idea of maybe asking Stan to sign it someday. Though I never did.

Stan was white-haired and full-bearded when I knew him, and I used to joke that it was as if God himself had showed up for Guild meetings. Though not in his presence, of course…

One response to “Stan Barstow”