Exciting stuff – I’ve been invited to join the bunch of fellow-writers who have founded the groundbreaking Top Suspense Group. It’s an online resource for readers in the fast-expanding eBook market.

To mark my debut with the gang I’m launching the Kindle version of my novel Valley of Lights at the rock-bottom Amazon price of 99c, for one month only. 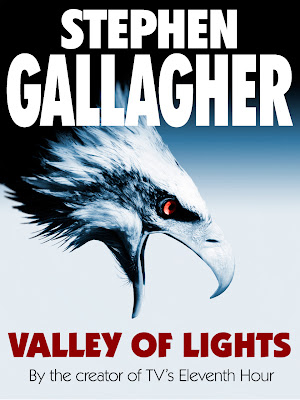 When Phoenix Police Sergeant Alex Volchak discovers the true nature of a predator that has survived among us unnoticed for generations, he puts himself and those around him in mortal danger. “An excellent thriller… a cracking pace… large helpings of deadpan gallows humour… a genuine ability to create a sense of evil.” Evening Times “The best fusion of crime and horror since Hjortsberg’s Falling Angel.” Time Out

This is a significant development, I think. As readers we look for some kind of filtering and guidance to help us seek out the kind of books we might like, and in this brave new world there’s not a lot of it around.

From the group’s initial press release:

The e-book market is exploding. With over 700,000 e-books currently available and hundreds more added every week, it’s growing increasingly difficult to distinguish quality books from those that are unedited and written by inexperienced authors.

That’s why nine established, professional authors have formed Top Suspense Group, a site where readers are guaranteed to find top-notch, award-winning authors in multiple genres who deliver a great e-reading experience in their dozens of highly-acclaimed books.

“Readers can count on us,” acclaimed author Max Allan Collins explains. “Every member of our group has already made his or her mark on genre fiction, whether it’s noir, crime, mystery, thriller, horror or Westerns, and in some cases, several of these genres.”

Top Suspense authors have each:

All of us appear in the group’s first anthology of short fiction – call it a taster, if you like – about which, more below.