I’m fortunate. I work in a London-centred business but I don’t have to live in London. I love the place, and I’ve lived there in the past; in Notting Hill Gate in the mid-seventies, when it was cheap, and for a while in Bayswater in the late 90s, when it wasn’t. I always think of London as a great place to live, but not so great a place to spend your life.

Nowadays I just get in when I need to. It’s a couple of hours on the train, or longer in the car when the trains have let me down yet again and I’ve sworn off them for a while. When I meet new people they always ask me where I’ve come from, and it’s always slightly tricky to explain.

I live in Lancashire’s Ribble Valley, with a view of Pendle Hill from the fields above my house. The closest big town is Blackburn, where I set my novella In Gethsemene. I think its most conspicuous genre connection would be with William Hope Hodgson, known for riding his bike down the long cobbled stairwalk along the side of Corporation Park. He opened his physical sculpture school in the town, and it was here that he bound the visiting Harry Houdini so tightly that it took him two hours to make his escape.

The novelist David Cook lived in my village. Dodie ‘101 Dalmatians‘ Smith was raised in nearby Chorley and Jeanette Winterson in Accrington.

It was Charles Dickens’ visit to nearby Preston that inspired the ‘Coketown’ of Hard Times. 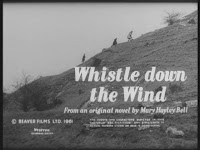 But none of that gives you any idea of just how lovely the valley can be. It runs across into Yorkshire, into All Creatures Great and Small country. Recently it was used extensively as a location for the BBC’s Born and Bred.

But, most importantly for me, 1961’s Whistle Down the Wind was shot about five miles from here. It was the first movie I was ever taken to see, by my grandmother at the Carlton cinema in Salford, and I’ve been stealing from its themes and emotional objectives throughout my career. A few years back I sent a copy of Nightmare, With Angel to Bryan Forbes, thanking him for the movie and acknowledging the debt. I still have the nice note he sent me in return.

My recording of the Whistle Down the Wind score was lifted from a nostalgically crackly ’45. It was written by top British composer Malcolm Arnold.

Three or four years ago The South Bank Show ran a profile of Arnold and didn’t hold back on his mental health problems; his dementia had left him in need of constant care and supervision and it seemed to me that his carer, Anthony Day, did a heroic job of not only seeing to Arnold’s needs but also of maintaining his dignity. Day didn’t seem to have any life of his own away from his charge, nor to want one.

One response to “Where I’m At”