I just heard on the news that actor Edward Woodward has died at the age of 79. This is a post that I wrote in September 2008. 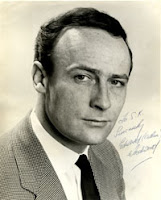 I came across my old autograph album when I was straightening the study a couple of weeks ago. Back when I was a child I used to study the end credits of my favourite shows and write to the stars at the addresses of the TV studios.

It’s not a huge collection. Getting autographs was a very hit and miss affair in those days. Now it’s an entire industry with a lot of fakery involved. But back then you sent your letter and then maybe you’d hear back six months later or maybe you wouldn’t.

My first was Roger Moore, a lovely colour postcard with a genuine signature. It’s got the spit smear where I tested it because I couldn’t quite believe it was real.

Others followed. Flicking through the album now, it’s like a mosaic of my dream life at the time. Richard Bradford, Patrick Troughton, Marshall Thompson, Steve Forrest, Lawrence Payne and Roger Foss from Sexton Blake. Christopher Lee. A lovely picture and a typed postcard from Peter Cushing, and a super 8 x 10 and a personal letter from Callan star Edward Woodward.

Callan was possibly the finest popular TV drama of its era, and one of the least well-remembered because it was made on tape, not film. What survives of the show is really just archive material, below what’s generally considered to be commercial quality. I know there was a movie, but that isn’t the same. Callan nailed the intimacy of the TV medium.

Years later a friend of mine was producing a film in which Woodward was appearing, and I asked if he would do me a favour and pass along a signed copy of Down River with a little note, along the lines of “you won’t remember this, but years ago…” And I think I even included a photocopy of his original letter to me.

My basic message was, “You showed me how a public figure ought to behave, and I’ve tried to follow your example” And I signed the book “To Edward Woodward, still my hero”.

Got another note back from him, saying how delighted he was.

And, you know? I was eleven years old all over again.