All Your Past Are Belong to eBay 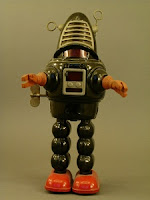 There are plenty of them about, and recent reproductions can be had for just a handful of change. Back in 1999 someone discovered a horde of unsold warehouse stock and began leaking them into the market one at a time, so even mint-in-box originals can be found without too much difficulty.

But this one isn’t just any old Yoshiya. This is the Action Planet Robot with the brown rubber hands.

Best Christmas present ever, circa 1960.

My parents bought it from Lewis’s department store on Market Street, in Manchester. I’d asked for a robot for Christmas and I’d begun to imagine what it might be like. In my dreams it was about my size and I pictured it climbing onto the bus with me, a kind of 1960s Asimo.

The Action Planet Robot that I took out of the wrapping paper on Christmas Day stood nine inches tall, walked with a shuffling clockwork gait, and made sparks behind a tinted plastic panel in its chest.

Do you know what? This was better!

(I can date it because the rubber-hands version didn’t stay in production for long. The earliest models had plain tin claws, which the reproductions, erm… reproduce. These were replaced sometime around 1960, but the rubber was fragile and perished quickly and so the hands were replaced again, this time by red plastic matching the boots. Later models had a black plastic head dome in place of the metal. There were other variants as well – versions in red, versions in olive green, non-clockwork versions powered by battery and a wire controller. I’ll stop now before I burn off my credibility completely.)

By New Year’s Day, I’d worn him out. About a week later a Lewis’s van pulled up in front of our house and a uniformed deliveryman brought a replacement to the door.

I wore that one out, too, in time.

On the outside he was still pristine, but on the inside all the soft metal of the cogs had been worn down by constant playing. He no longer walked, he could no longer spark. My dad reckoned that the machine shop at Shell might be able to do something with the parts and so we carefully prised apart the tin tabs that held his body together (the robot’s, not my dad’s) and extracted the clockwork.

Alas, it was not to be. Not only could the machine shop do nothing with the innards, we couldn’t even reassemble the shell properly.

I don’t remember being too cut up about it at the time. I’d probably moved on to other delights, newer obsessions. But there’s always that one toy of your childhood that sticks in your mind for life (Chad Valley Give-a-Show Projector fans, I’m talking to you), and this was mine.

I didn’t imagine I’d ever see one again, and then along came eBay. Every lost toy of your childhood is out there. The rubber-hands robot is notoriously rare and very hard to find with the rubber in anything like decent condition, but I found one. Somewhere in Texas, as I recall. It wasn’t cheap, but it was cheaper than jewellery or some crappy plate from the Franklin Mint.

So there it stands all day on my windowledge, watching me work. Not the exact same toy, but I suppose it’s kind of like cloning a pet – you like to think the spirit’s still there.

And if it ain’t about magic, what is it about?

Next time, staying on the remembered-Christmas theme, maybe I’ll have to tell you the story about this:

3 responses to “All Your Past Are Belong to eBay”