I’m grateful to Scott Andrews for the news that the many of the sets, props and weapons created by Production Designer Jonathan Lee for Crusoe have been shipped from South Africa to the UK. The sets have been reconstructed as an adventure play attraction at Groombridge Place near Tunbridge Wells (these images are Jonathan’s concept sketches, not views of the park itself; I haven’t seen any of those). 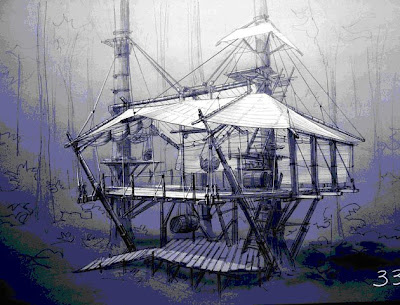 From their press release:

A desert island from a TV blockbuster has been recreated using props and artefacts which were shipped all the way from South Africa and the Indian Ocean.

Container loads of Robinson Crusoe’s belongings from the TV series ‘Crusoe’- which was shown on television screens at Christmas and starred Sean Bean, Sam Neill, Philip Winchester and Joss Ackland – have been delivered to Groombridge Place, near Tunbridge Wells, for the new attraction ‘Crusoe’s World’…

…Two tree houses have been built high in the trees linked together with rope bridges and a central viewing tower. They are on several levels with decking and platforms and the houses are sheltered under sail roofs. There is a look-out post high above one of the tree houses, providing fabulous views over the canal, open countryside and the steam trains of the Spa Valley Railway.

Actual props from the film, including Crusoe’s fishing equipment, cooking pots, catapult, boats, barrels, furniture and dummy weapons, are there for visitors to create a little make-believe on their very own desert island. 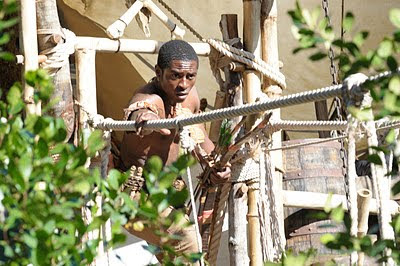 The Crusoe page on the NBC website is still live, and you can see more of Jonathan’s concept work here if you’re so inclined.