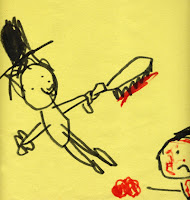 Have you ever noticed how, whenever a drama features a small child’s drawing that has to play some part in carrying the story forward, you can tell that a child didn’t do it?

(This one’s real. Jack the Ripper, drawn by my daughter, when she was aged about six. She’s twenty-one now. We used to worry until we caught on that we were actually raising Wednesday Addams.)

It’s almost always the case. Like those terrible overdubbing jobs where grown women provide children’s voices and we’re not supposed to notice.

A child’s spontenaeity is hard to fake as it is to spell. I was reminded of this a couple of days ago when I was sorting through some of my old file boxes. I came across some notes that I’d jotted down waaaaay back in 1982. Back then I was a newbie with two years of freelancing under my belt, and occasionally I’d do a writer visit to some local school – read a story, talk to the children, answer their questions. Doesn’t happen so much now, mainly because the children of my friends have all grown up and that’s where most of the requests came from.

About a week after a visit I’d get an envelope filled with stories the children had written. It’s a nice feeling, I can tell you. And children write like they paint. I’ve no memory of doing this, but on that occasion in ’82 I copied out some of the passages before returning the stories. Probably to remind myself what genuinely fresh writing looked like.

Spelling and punctuation are shown exactly as-was. I think these are vivid and funny, in the best possible way.

My name is Anna I where glasses I have freccles and long black hair. I go to boarding school. Last night I wrote a letter to my boyfriend to say shove off.

Some stories touched on the supernatural:

One day the witch was making a spell and saying I will go and get the bottle. Now the witch had put lots of ingredients into the pot there were tadpoles slugs snails and wee wee.

And some were science fiction:

John Richards carefully placed the tray of chemicals on the commanders desk. “Thanks Richards” said Commander Dilson. “these chemicals may be futile if dropped.”

Some of the spelling was downright creative:

The space cat has many advantagis Like his protectiv scine and his jetts witch he can go very fast with them and his big earess he can hear 2 miles away from him. Now you know his advatagis well get on with the adventure.

From The Adventures of the Man in Space:

And this, from the epic The Space Being:

Once upon a time in 1981 there lived a marshan strat from Marse. When he left Marse he was ten. So when he got to earth he would be oldenof to bring some girls home, if he falled he would be killed. All the marshans what has tride to do the tasked was killed because they falled. The marshan was called Peter. Peter liked to play little Wisel.

In ten years he reached earth. He crased in the at the beach. He came out and he looked around and said “Bagige blar blar blar blere plaseif” which ment good morning, aney more girls.

No, I’ve no idea what ‘little Wisel’ is.

And finally, can somebody please tell me what was going on in this kid’s head?

Then one day another Space Dust monster came from the planet XTS. And changed places with the heir to the throne, King Two-bo-locks.