Of Robots and Heroes

While we’re talking about the old-time stuff, and recuts and mashups, and harking back to this earlier post…

I still have my Super-8 print of the 1942 Lewis Wilson/Douglas Croft Batman serial, which was only available as six 200 foot silent spools… back in my student days I cut them all together, put a mag stripe on them, and added a semi-synchronised music and effects track that was very heavy on the Beethoven. The premiere was in Grant Hall’s C-Block at The Lawns in Cottingham, sometime around 1972.

(If I say that C-Block had a film society, that makes it sound quite serious and erudite. What we actually had was a keg of beer, my Super 8 projector, and a sheet hung over the stairwell window. The night we screened Metropolis, all the lads were rooting for Rotwang. Probably because of his name; but he was also a Bad Guy with cool hair and a metal hand. What was not to admire?) 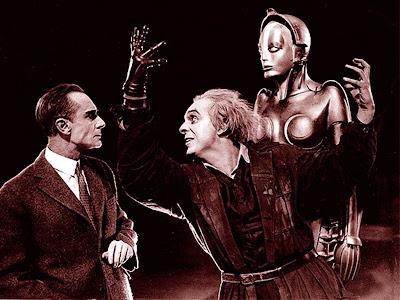 My favourite sequence is the one where Batman effects a rescue by tightrope-walking along a power line, and the bad guys switch on the electricity… which then SLOWLY fizzes its way along the wire like a gunpowder fuse. All to the accompaniment of the Eroica symphony. Best watched when drunk.

In fact, now I think about it, it’s fantastic if watched when drunk.