So there we were, at the Getty Villa. It’s quite a place. Situated on the Pacific Coast Highway between Santa Monica and Malibu, it’s like the little-brother museum to the spectacular Getty Center.

The Getty Center’s further inland, on a hilltop overlooking the Sepulveda Pass, and looking like Tony Stark’s place in the Iron Man movies. You even reach it by a private monorail. The Villa, on the other hand, can’t be seen from the road. That, plus the fact that you can’t just show up but have to book a timed ticket online to get in, led me to expect something comparatively modest.

Idiot that I am.

The numbers are controlled because the access is tricky, but the museum isn’t small and once you’re in you can stay all day, if you’re inclined. The villa was designed and built to house the classical artefacts of the Getty collection; vases, bronzes, marbles and frescoes, with the odd mummy or case of jewellery thrown in for good measure. The design is based on a country house in Herculaneum that was buried in the eruption of Mount Vesuvius. Right there, in the Malibu hills. A walk around it wipes away two thousand years or more, to give you a gut feeling of what complex, sophisticated people the creators and owners of these objects were.

The hillside setting incorporates a peristyle, one of those enclosed Roman gardens with a long pool where guys in togas chased concubines and people lay around eating grapes off the bunch. Or something like that.

When we go to a museum or a gallery we usually fix a time to meet and then wander off separately, so we can each browse at our own pace. In an alcove at the end of the peristyle, away from the main body of the museum, I found an alcove. In the alcove stood a tall marble statue, and on the wall by the statue was a plaque that read PLEASE TOUCH in both normal script and braille.

The marble was a 1920s copy of a Canova original. As the plaque went on to explain, the purpose in placing it there was to give people the opportunity to feel the various textures of the stone and to appreciate the work of the sculptor in a tactile way. In the main rooms of the museum there were few barriers and you could get right up close to the objects, but contact was forbidden… there were notices explaining how the grease and oils in skin can bollix up stone. I’ve seen those shiny-footed saints in Rome and I know that it’s true.

But I didn’t take advantage. Here’s why.

Imagine you’re at the Villa. You got your timed ticket and you’ve been walking around the galleries, and you’re taking time out for a stroll to the end of the Roman garden. At the end of the peristyle you turn the corner to be confronted by the sight of a middle-aged English bloke standing on tiptoe with his eyes closed, running his hands all over this… 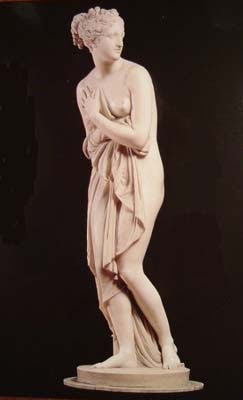 I believe my point is made.

One response to “Please Touch”