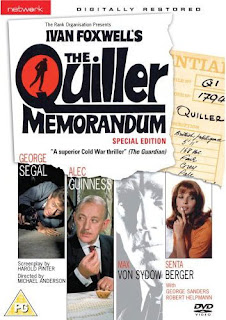 Last night, in a collision of whim and a weekend sale by the good folk at Network DVD, I watched The Quiller Memorandum for the first time in a number of years.

(Pause for a quick shout-out to my daughter Ellen, singing at the Bloodstock festival today with the band Neonfly. Check out the site – it looks like a great event and the band names alone are worth the visit.)

The movie’s one of those big-budget, widescreen, sober-faced cold-war spy thrillers of the 1960s. The best of them was probably The Spy Who Came in from the Cold, the most entertaining The Ipcress File. I knew there was something about Quiller that gave it some special place in my affections, but I couldn’t for the life of me remember what.

Now I know. It wasn’t the story, which is well-shaped enough but thinly-spread and improbable, and mostly rigged to deliver a final act in which Our Hero wanders empty streets while the Bad Guys shadow him in plain sight, daring him to make a move. Nor was it Harold Pinter’s dialogue – I’ll happily concede that Pinter was a theatrical genius but a very little of that mannered non-sequitur stuff goes a long way with me.

No, the two main elements responsible for the film’s hold on my heart are its brilliant use of ’60s West Berlin locations, and its John Barry score. There some incidental pleasures as well – Alec Guinness as Quiller’s spymaster, conjuring a memorable character out of thin air before your eyes, and a neat improvised escape with a bomb sliding its way down the vibrating bonnet of an idling car – but the narrative isn’t one of them. You pretty much have to tune out of the story’s logic in order to enjoy what it lays before you.

If I had to describe it I’d have to say it’s a bunch of top-notch actors doing the kind of things they do in spy films, in a package that’s professionally executed. What the movie lacks in soul, West Berlin and John Barry supply.

Though he does an adequate job in the lead, George Segal has been better elsewhere; not least in Bryan Forbes’ King Rat. For me the preferred Quiller has always been Michael Jayston; though the 70s series suffered from the usual BBC studio-cheapness and many of the episodes are now lost, Jayston (with whom I later got to work when he took the lead in An Alternative to Suicide) was the man.