Still on that Real/Fake Experience Theme

Remember the big fire at Universal Studios in 2008? They lost some backlot structures and library material, all replaceable, and King Kong.

The ‘Kongfrontation‘ attraction, in case you didn’t know it, involved a giant robot that picked up the bridge that your tour tram was crossing, and shook it. Life sized. A giant robot! King Kong! Thirty-seven feet tall! Only slightly less awesome than his Florida counterpart, but only because in Florida you were up in the air in a cable car when the helicopter attack came.

Dwell on that for a moment. Giant robot. Cable car. Helicopter attack.

They’re replacing it with something that they believe will be better – a ‘4D experience’, which involves 3D movie projection combined with physical effects. Yes, you’ll have to wear glasses.

I went to the theme park last week and used my year pass – from where I am it’s not much more than a fifteen minute drive down Ventura Boulevard and I needed a change of scene. I’d sprung for the year pass so that I could drop by and see the Waterworld show whenever the urge took me; it’s a live-action stunt spectacular with high falls and explosions that ends with a full-sized seaplane coming in over the back of the set and crashing a few feet in front of the audience. I wasn’t going to blow the surprise for you until I saw how heavily they feature the moment in their promotional video.

I thought I’d just do a couple of hours and catch the show but when I got there, it was ‘closed for refurbishment’. So I saw the Blues Brothers show (OK) and Terminator 3D (as underwhelming as I remember it – a dimly-projected 3D mini-movie bookended by live action sequences) and then went on the Jurassic Park ride with its sub-Disney animatronics and awesome water plunge, even more awesome when you sit in the front row.

When I came out they announced that there’d be a Waterworld show after all, at 3pm. It’s a slow time of year for the park, with no lines anywhere, but the outdoor auditorium filled up quickly. I reckon it might have been a dress rehearsal for a new cast… it was badly-paced, had missed cues, and two of the boats broke down.

But at least the seaplane did its stuff. And instead of being drawn into the show, I found myself reflecting on what made the rest of it work. When I told my daughter – as big a theme park freak as you’ll ever meet – she wrote back, I actually think it’s pretty cool to see a flawed production as long as you’ve already seen a perfect version – it’s interesting to see and highlights the complexity of what they’re trying to achieve.

While I was in the park I learned that they’re closing the Backdraft fire-effects exhibit (OK, so no big loss – the buildup to the payoff leans heavily on a movie that few people now remember) and replacing it with a Transformers ride. The way they describe it, the Transformers ride is going to be another ‘4D experience’, the same kind of thing as the Spiderman ride in Florida. The feature they’re most proud of is the way they’ve programmed the 3D screens so that the perspective convergence lines shift in sync with the moving carriage to maintain the point of view.

Which, let’s be honest, is an impressive feat. But to my mind we’re looking at the difference between a museum with amazing authentic stuff in it and one of those ‘interactive experience’ exhibits full of kids hammering buttons and ignoring the lame snippets of information that come up on screens. Stuff, versus pictures of stuff.

Me, I’d rather see a giant robot or a live seaplane crash any day. But maybe I’m just out of step.

You can read about the new attraction in the LA Times. Apparently the cost of virtual Kong is more than six times than that of rebuilding the animatronic. This is what you’ll be missing: 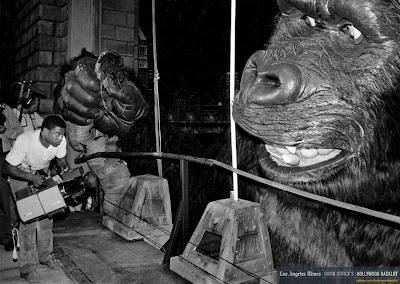 And here’s what you’ll get.

6 responses to “Still on that Real/Fake Experience Theme”