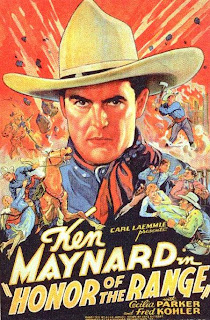 I got to the Autry National Center of the American West in Griffith Park yesterday – looked as if there might not be much to it at first but it was good fun. Like a pocket version of the Cody museum in Wyoming. Even has a Buffalo Bill section, and a series of rooms dedicated to early western movies with an emphasis on B-movie cowboys. There was a corner of a case with Ken Maynard memorabilia – my dad’s childhood hero. Felt like coming full circle.

One of the galleries houses an exhibition called Sparkle and Twang, a collection of Country Music memorabilia accumulated by Marty Stuart throughtout his career. Not a name I was familiar with. He started as a teenaged mandolin player with Lester Flatt’s band (Lester Flatt and Earl Scruggs played The Beverly Hillbillies theme and on the Bonnie and Clyde soundtrack) and played backing for Johnny Cash before he went solo. I wasn’t expecting much but the collection’s great – loads of gaudy and ludicrous stage clothes worn by various big names, handwritten lyrics by Hank Williams, Cash’s first ‘man in black’ suit and an explanation of how he landed on the style, and various videos of just the right length.

It’ll be worth another visit. I wanted to go in the bookshop but I was in the museum right up until closing time. Only just managed to see everything. The entrance to the LA Zoo is directly opposite.

2 responses to “The Autry”