The Living Dead at the Manchester Festival

One of the most heroic spectacles I ever witnessed on a public stage was that of Stephen Laws conducting an interview with Jorge Grau about his life and films. That’s Jorge Grau, director of the cannibal zombie classic The Living Dead at the Manchester Morgue… kind of apposite because this was at the annual Festival of Fantastic Films in Manchester, where the two of us helped out with the presentation work for more years than I care to count. 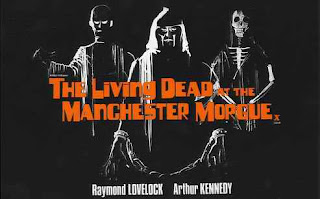 Grau spoke only Spanish. An interpreter had been promised, but not arranged. Italian director Antonio Margheriti, being interviewed elsewhere on the programme, spoke a little English and a little Spanish and was drafted in to help out.

Steve had to make himself understood to Margheriti, which in itself was no easy task; Margheriti then had to find a way to put over to Grau what he thought Steve had asked. Grau would shake his head, mystified, and everyone would try again. When Grau was finally able to get a handle on some version of the original question, his reply would start the long, long journey back.

Thirty minutes of this, and then someone appeared with a charming young woman and man that they’d hauled from a nearby Spanish restaurant. I think he was Spanish with some English, and she English with some Spanish… anyway, something like that. But they knew absolutely nothing about films. They joined the three onstage and from that point onward, all five of them were at it.

But here’s the thing… by the end of the hour, Laws had succeeded in getting an interview out of Grau. Lesser men would have been carried off gibbering about ten minutes in.

The Festival paid the expenses of every guest and presented each with a statuette that was the most gorgeous thing of its kind I’ve ever seen; it was the robot Maria from Metropolis, perfectly sculpted and cast in pewter.

Every year Laws and I would present these at the end of each onstage interview (on one memorable occasion, the box was slid within reach as the interview ended… Laws gave it the big presentation speech buildup, and opened the box with a flourish to reveal… nothing), and then we’d pay our own hotel bills and go home.

I always lusted after one of those Marias… but Laws genuinely deserved one. 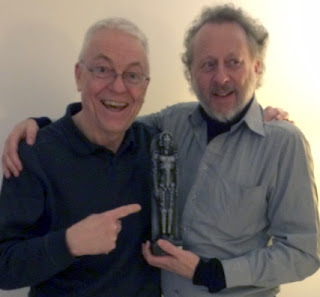