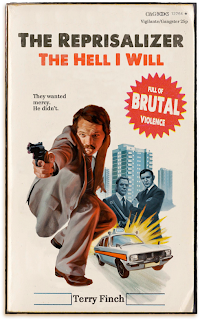 Anyone familiar with British 70s paperback series, and particularly those from the New English Library, will know exactly what’s going on here.

This spoof site is the brainchild of British comedy actor Matthew Holness, whose previous comic creation was horror writer Garth Marenghi, the “self-appointed mastermind author” and writer, producer and director of Garth Mareghi’s Darkplace. Imagine if the UK’s worst horror hack had been given the sets, cast, and budget of the cheapest 80s daytime soap, and you’re probably there.

Holness’s new creation is Bob Shuter, “suburban vigilante”, riding a “red hot trail of vengeance through the urban hell of Thanet” in such titles as I, The Fury, Stock Car Slaughter, and Riot in Borstal Wing ‘B’, all supposedly the work of prolific and plainly demented wordsmith Terry Finch.

Apparently there’s a Reprisalizer feature in development which plays a line between satire and dark psychology. It’s expanded from Holness’ 17-minute short A Gun for George.

Personally I’m torn between appreciation of the spoof, and feelings of genuine nostalgia.

One response to “The Reprisalizer”