Well, it works for me

Sometimes it doesn’t take much to brighten my day. 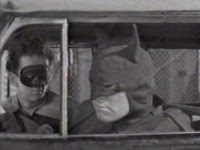 For all I know this may be common knowledge. But it was news to me when I heard it and made the connection a couple of weeks ago.

Michael G Wilson, stepson of Albert ‘Cubby’ Broccoli and Executive Producer and sometimes co-writer on the Bond movies since 1979, is the son of actor Lewis Wilson.

Lewis Wilson was the first screen Batman. He played the lead role in the 1942 Columbia serial, with Douglas Croft as Robin and J Carroll Naish in the villain’s role.

My universe has meaning.

5 responses to “Well, it works for me”