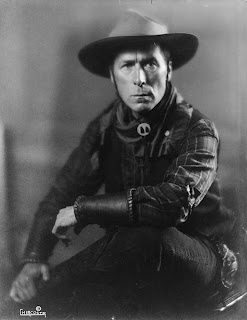 William S Hart was one of the biggest stars of the silent era. He made Westerns with the onscreen persona of a strong and silent hero, usually with a criminal past for which he’d earn redemption by displaying moral conscience in extreme adversity.

In his day, his drawing-power and earnings made him the equal of Fairbanks and Pickford. He’s not so well-remembered as his peers. But he is remembered. Tumbleweeds in 1925 was his last (and many reckon his best) feature.

Last weekend I drove up to visit his retirement ranch in Newhall, just outside Santa Clarita. The hilltop house is preserved just as it was when Hart lived there, with all his memorabilia and the original furniture. He extended the house to give himself a new bedroom because his dogs took over the one he started with. They were Great Danes, so you can see why. His dogs are all buried on the ranch, as is Fritz, his movie horse.

The half-hour guided tour is free but there’s a box for donations. After the tour I went for a walk on the nature trail behind the house. Along the way I saw warning signs about both rattlesnakes and mountain lions, basically to the effect that rattlers don’t attack unless threatened or hurt, and most mountain lions will back off if you wave your arms and shout.

The addendum to that was, if you get a mountain lion that isn’t scared off by a show of defiance, report it to the rangers.

Okay, the following picture has nothing to do with anything. It’s my parking space on the lot. Just wanted to share. 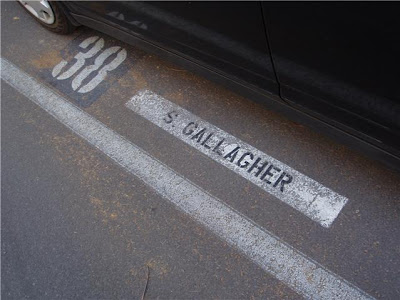 Hey, it’s my birthday. Indulge me.