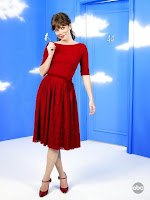 I saw the first Pushing Daisies when it was leaked pre-air in 2007. I thought it made a great mini-movie but couldn’t see the long-running series potential in it. Series tend to follow formula and spread their invention, and this did neither.

The second episode surprised and convinced me. It was the second episode that made me a fan. Opening episodes get all the attention but it’s second episodes that are vital in establishing whether a show’s to develop a following. Every showrunner knows this and, trust me, they factor it into their global thinking about the series’ design.

Today I learn that for its UK showings, ITV are skipping the second episode of Pushing Daisies for the usual reason – to privilege a sports fixture later in the schedule.

The BBC’s clumsy re-edit of Rome’s first three hours into two all but dissuaded me from staying with it. A friend talked me into giving the HBO cut a second chance, and I was hooked. There surely must be a lesson there.