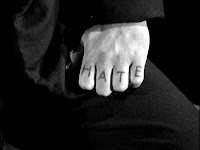 In the comments section, Stan asked:

“On the topic of novel-to-film translations, what would be your favourites? I was very impressed with ‘LA Confidential’ and ‘The English Patient’ – they both seemed to condense large novels without really losing anything (although they did actually dispense with a lot of plot and characters). It’s a crime that ‘Titanic’ got best picture Oscar instead of ‘LA Confidential’!”

The same question came up in the magazine interview I mentioned a couple of posts back, so for speed and sheer laziness here are a couple more cherrypicks from it:

The question was, What kinds of books do you feel best translate to film or television?

A strong story with a good structure, fashioned as a narrative in which events shape character and lead to some form of crisis, is always going to play well in either medium. I re-watched LA Confidential a couple of nights ago and was reminded of how it’s one of those rare films that’s not just adapted from a novel, but feels as satisfying as one.

I think Ira Levin’s A Kiss Before Dying is pretty well unfilmable. Two adaptations have proved it. But you have to read it to see why. There’s no cinematic parallel for the way that Levin manipulates viewpoint and reader perception.

I haven’t read the source novel of The English Patient so I can’t say much on that subject, although I understand that the book’s style and structure called for some radical reorganisation from Anthony Minghella.

I usually point to Ted Tally’s screenplay adaptation of The Silence of the Lambs as my idea of the model adaptation. It’s the heart and guts of the book – images, relationships, pace, atmosphere, everything the author was looking to put into prose – properly and cinematically re-imagined. And there are moments in the Boam/Cronenberg version of The Dead Zone that nail what Stephen King’s all about, better than any film-of-the-book before or since. But for something extraordinary, I’d maybe have to say The Night of the Hunter.

(The screenplay for which is credited to critic James Agee, although Robert Mitchum would later claim that Charles Laughton disliked Agee’s material so much that Laughton paid him off and rewrote the screenplay himself. Usually I’m seriously doubting of such director-aggrandising stories and in this case, Agee’s reputation is supported by the 2004 discovery of his first draft. Though it’s overlong, Laughton’s film apparently follows it scene-for-scene. If Agee nailed the structure and the scenes, then he wrote the film; anything beyond that is editing.)

(And for the avoidance of doubt, I also think that Laughton did a brilliant job.)