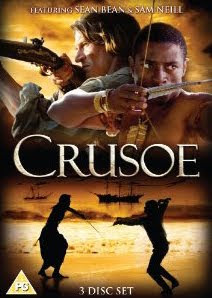 This one sneaked by without my hearing about it… the full season is now available on a Region 2 3-disc set, presumably replicating the content of the Region 1 release.

Which will mean no DVD extras, which is a pity. NBC had a behind-the-scenes crew covering just about every aspect of the show’s making, and their material generated a healthy number of featurettes for the Crusoe section of the NBC website. Almost none of which I got to see, because the video streams would only play for US users.

Apart from an initial week of meetings where all of the writers got together with the producers in Power’s London office, nearly all my work on the show was done from my study in England by phone, email and internet feed. I was in constant and regular touch with producer Jeff Hayes on the island sets (actually a stretch of the Nature’s Valley coastline in South Africa), with the Power team in London, and with the NBC and Universal execs in Los Angeles. I saw auditions via video link and we conferenced for notes calls with sometimes as many as eight or nine people on the line.

I never even got close to visiting our South African locations, which could have been useful. I’d have taken a more practical approach to the way I structured the treehouse scenes had I realised that the base and the platform were separated by a number of miles, and a simple dialogue between Friday on the ground and Crusoe on the deck required a complete crew move!

I did get to be a part of UK location scouting in and around York, in a unique approach that was mostly born of necessity. They’d had a couple of Canadian guys working on scripts and a bible, and that hadn’t worked out as hoped. Their take on it was close to the book and not the balls-out, gung-ho adventure show that NBC had been promised. Time was now short but then along came the WGA strike, halting all progress; as an outsourced production Crusoe wasn’t actually a struck project, but I didn’t want to spend the rest of my career explaining as much and so I only came on board when the strike had ended.

Now the clock was really ticking. All we had was Defoe’s novel, Power’s pitch to NBC, and some brilliant visual concept work from production designer Jonathan Lee. So here’s what I proposed, and how it worked out; firstly, before anything else was written, I’d write the full hour’s worth of flashback scenes for the whole season. We’d shoot those and then, as the crew was relocating to the South African base, I’d complete and deliver the pilot. Somewhere along the way, the pilot specification grew to a double episode; by then I was well into it and could see that my script was going to be way over. So I was blase about the challenge, and didn’t let on that the extra length was actually the solution to a problem.

But the York production date was looming, and preproduction had to begin before the material was actually written. So armed with only an outline and a rough idea of what I was going to do with it, I went out with the team and we looked for places to match the story. In the bar of the Royal York Hotel each evening, we’d go over what we’d seen and I’d improvise and elaborate on the outline, so the team could take away specifics and start doing their jobs. Exploiting the best of what we’d seen, shaping the unwritten script to avoid pitfalls, getting the best out of that fantastic city and some wonderful old houses in the surrounding countryside. As they set to work, I went home and did the same. I have to tell you, it was one of my best writing experiences ever.

As I recall, we pretty much took over York for the May Bank Holiday. They closed down York Minster for us, cleared out all the seating, and let us bring in an enormous crane. We closed the Shambles for a morning. We filled the streets with extras, horses, dogs, goats, and cables. Miles of cables. Not to mention large numbers of Women of a Certain Age craning for a glimpse of Sean Bean. 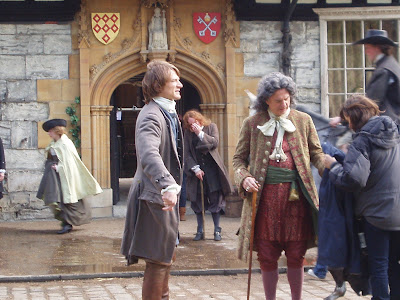 (There are more pictures from the York shoot in this earlier post.)

Then everyone headed for the sunshine and I stayed behind. Except… heading to the Southern hemisphere meant heading into the South African winter. During those first weeks of shooting, I’d see the uncut rushes coming up the line with our shirtless heroes framed against the sunset on some glorious beach… with the last few seconds of the shot revealing a crew in thermals and puffer jackets, their breath misting in the cold air.

So maybe I didn’t miss out too much. And frankly, with the pressure of shooting, there was no time for me to make the journey. It was an experience, all right; my first time working with an American network.

It was a bumpy ride. But so’s the Indiana Jones jeep adventure in Disneyland, and people queue up for that.

One response to “Crusoe Region 2”