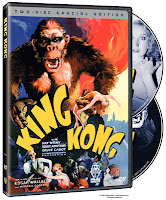 Although prolific British thriller writer Edgar Wallace has a ‘conceived by’ co-credit on the 1933 film, Merian C Cooper later denied that Wallace had any hand in the finished product. “Edgar Wallace didn’t write any of Kong,” he said, “not one bloody word.”

Wallace died before production began, but in his diary mentioned completing a Kong scenario during his final boat trip to the US.

I recall reading somewhere (but cannot, alas, locate the reference) that there’s a tantalising document catalogued under Wallace’s name in the Library of Congress (?) that may or may not be that very item.