In a message via the contact page, Nancy wrote:

My family and I have really enjoyed watching the Crusoe series but wish we knew how the story would have ended. Do you have any ideas how you would have reunited Robinson and Susannah?

Well I do, and I did, although in series TV drama it’s never quite as simple as that… preparing for a future season is like having to pack and plan for a trip you may or may not get to make, by routes and means you can’t yet choose, over a distance that only fate will determine. One of the cutest things I’ve read in recent years was the novelist with a couple of books to his name on how much better a job he’d have made of the plotting of Lost.

Brother, you can have no idea.

During our development period, NBC were pretty clear that this was to be a thirteen-part miniseries, entirely self-contained. But once shooting began I started getting signals from the London office to keep some story options open for a possible second season.

Tricky stuff. But then it’s the challenge faced by almost every American show, and by any British drama series incorporating a seasonal arc; to offer both closure and continuation, keeping the ball in the air, answering enough questions to give satisfaction without closing the door on further developments.

The comments on Amazon’s Crusoe DVD page suggest that Nancy’s family aren’t alone in their curiosity, so here’s what I told her:

My plan, had we been given a second season, was for Susannah to use some of Blackthorne’s fortune to charter a rescue ship with the Spanish captain (Santana) in command. Olivia would stay close to Susannah but we’d never be sure of her motives – is she Susannah’s friend or her enemy? Is she selflessly working for Crusoe’s happiness at the expense of her own, or using Susannah to get him for herself?

Meanwhile Crusoe and Friday are back on the island and Crusoe’s finding it hard to recapture his optimism after such a huge betrayal and the destruction of everything that he’d built. Friday takes it upon himself to motivate and encourage him, and eventually they get to leave the island by the subterfuge of allowing themselves to be captured by the Spanish Garda Costa with their escape already planned and prepared for.

After escaping they make their way up through the Carribean in a series of high-seas adventures as wanted men, while Susannah arrives at the empty island and finds evidence that suggests Crusoe may have lost hope and died there. Believing him dead, she gathers what she can find with the intention of taking it back to the children. But their ship has been stalked by pirates who now take it for booty and Susannah for ransom.

The Spanish captain has no value and is left alone on the island but, a seasoned mariner with access to a sunken longboat, he’s able to reach civilisation and to contact Crusoe, who by now is in a Spanish jail in one of the ports waiting to be hanged. After a daring escape, Crusoe, Friday and the Captain steal a ship and sail to the rescue. Crusoe and Susannah are reunited and return to England.

And had there been a third season… that would have started a couple of years on, with Crusoe prospering in England and Friday fitting into society, adopting the style of an English gentleman but uncomfortable at being perceived as a novelty wherever he goes. I’d envisage an anti-slavery plot taking them back onto the high seas, but beyond the broad outline of an idea I’d develop it no further until I saw how season 2 had worked out.

Well, that was the dream. Whether there’d have been the budget to achieve it is another matter. Crusoe was a show of exceptional visual lushness but it wasn’t an expensive production; one of the factors that had lured NBC had been the prospect of numerous inexpensive two-hander stories featuring just our main cast pitted against “the island itself”.

In practice those two-handers were a problem; with two protagonists and no antagonist, the prospects for drama were limited. Stories could easily fall into a pattern; Crusoe and Friday have a spat, one of them stomps off, he falls in a hole, their differences are forgotten as they cooperate in a rescue. They discover something interesting, one want to leave it where it is and the other wants to take it home, one stomps off and the other one tries to reach it and falls into a hole… with five acts and a teaser to fill, it’s not easy to stretch that out and keep it alive.

It was producer Jeff Hayes’ idea to get them off the island in season two and send them buccaneering. I was all for it, especially since the budgeting would be his problem! But ships and ports and cities full of extras don’t come cheap, and maybe we’d have been forced to change our plan.

It’s all hypothetical now, anyway. Time’s moved on. Anna Walton went on to a lead role in the British suspense feature Deviation, and Philip Winchester is currently starring in another UK/US production, Cinemax’s Strike Back. But here’s an off-camera moment with Mark Dexter, filming on a May 2008 Bank Holiday in York Minster. 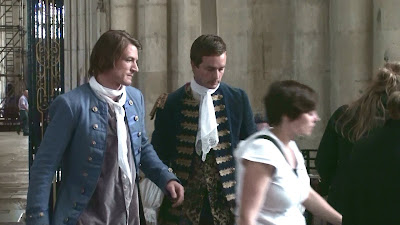 You can find more behind-the-scenes stuff here. I shot some HD footage during the UK filming; it’s still sitting on the hard drive but I’m planning to get it edited and online Real Soon Now, in my Copious Spare Time.