Too Much Monkey Business

There’s been a lot of online coverage about the Cadbury’s drumming gorilla ad… viral activity that felt spontaneous and justified at first but which (or maybe it’s just me) is beginning to feel more than a little manipulative now.

After some speculation as to whether it was actually Phil Collins in the gorilla costume (duh?) it’s been revealed that the wearer of the Stan Winston-created prosthetic suit is “a little-known actor called Garon Michael.”

It turns out that Garon Michael is actually an ape movement specialist with a string of feature credits to his name. To my eye the ‘little known’ tag is an unnecessary putdown – far from being plucked from a deserved obscurity he’s actually one of the go-to guys for this kind of job.

Sometimes you wonder if people realise that there’s a whole other world behind what they’re seeing on the screen. Back around 1990 I adapted my man-animal hybrid novel Chimera for ITV, and the crew included a primate movement and behaviour specialist named Peter Elliot. He worked closely with Dougie Mann, who wore the mask and played the role. 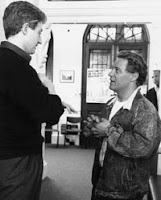 Peter was then, and continues to be, one of the top-ranked choreographer/performers in the field. His credits can be traced back to Greystoke and Quest for Fire, and he teaches animal study at London’s Central School of Speech and Drama.

He can be seen on the right of the picture, talking to Paul O’Grady on one of the Chimera sets (I think it’s the village hall in Kettlewell, Yorkshire, which we’d turned into an emergency morgue for the victims of a mass slaying. O’Grady played a sign language interpreter, some time before he became more widely-known for his Lily Savage persona).

Dougie Mann had also worked on Greystoke. I think I’ve got a shot of him without the mask somewhere and if I can dig it out, I’ll post it. Whenever there’s a Congo or a Gorillas in the Mist in production you’ll find a whole community of these specialists being pulled together.

I suppose what I’m trying to say is, there’s a lot more to it than just showing up and putting on the monkey suit.