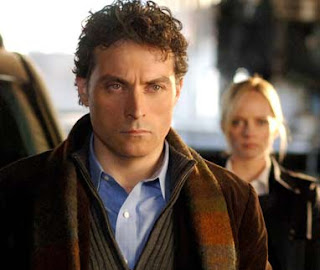 Searching through some old emails I came across this one, written as part of the to-and-fro when I was finally freed up to be able to contribute to the US version of Eleventh Hour. Just as I started pitching the story that was to become the episode titled Subway, CBS came up with the idea of adding a third character to the team. This was my response. I think there’s enough distance now that it won’t matter if I share it. Not least because it gives me a chance to air some long-held views on the ways in which characters balance each other in series TV.

I’d urge care over this ‘third member’ question as it’s one of those understandable concerns but with a potential to sabotage the fundamental dynamic of the show… imagine if THE X FILES had featured a 3-person team.

A long time ago I noticed a distinction between the shows I liked best and the ones that I still liked, but which stood in their shadow. The front-rank shows were built around single lead characters or were two-handers. Where a show featured a team of 3, the characters always seemed to fall into the same regular configuration; I called them the Father, the Lad, and the Desirable Tomboy. This applied regardless of gender.

The Father is the steady one, the responsible one, maybe older. Finds the cases or receives the orders and is perceived as the head of the team. The Lad is self-assured, impetuous, energetic, a different girlfriend every week. The Desirable Tomboy is intelligent and sexy but she holds herself sexually aloof. She has an unstated thing for the father. The Lad has a barely-concealed interest in her. The Father has relationships outside the team that we only ever get hints about.

(Example: every ‘two guys and a gal’ team show ever made)

When first working on 11thH I had some ideas about an extended regular cast but always with a view to keeping the Hood/Rachel relationship of equals intact. Add a third corner to the team, and that will go. Hood will be pushed into being the Father.

So a third member needs to be distanced slightly so as not to become the third person in a marriage. I experimented with a senior figure within government, the man who recruited Hood and who protects him politically so that he can get on with what he does. But that was too far offstage and not very interesting.

So my other thought was for a kind of field facilitator, someone who gets sent out to rendezvous with Hood and Rachel in the field and provide them with stuff they may need or make local arrangements – source them a geiger counter, find and rent an aircraft hangar, open a channel of contact with some local activist group. Kind of a cross between Q showing up in Tokyo with a bunch of gadgets for James Bond, and a junior vice-president being sent out to a distant location to crack the studio whip, only to be drawn into the adventure of the shoot. So Hood may manipulate/charm him/her into playing an unwilling part in the week’s adventure – a part which forms a separate thread to the Hood/Rachel story. More of a B story running parallel, ending with the supply of some vital piece of the jigsaw for the final act. Avoiding the obligation always to make this character part of the denouement. And used sparingly, to keep them fresh and so their participation doesn’t start to feel obligatory and routine.

So what I’m suggesting is; third character fine, but not a fully equal member. A Bickley to their Mork and Mindy.

Here’s how it works; what the network asks for, the network tends to get. In this case the outcome was the addition of Omar Benson Miller as Felix Lee. Subway marked his second appearance, so I had some hand in shaping his character. Felix was a hit with viewers and when the show wasn’t renewed for a second season, Omar wasn’t short of offers. Good for him.

But had we gone into a second season and there had been pressure for more and more of Felix, I’m in no doubt that the show would have grown less like Eleventh Hour, and more like other shows.

Which, at heart, is what networks tend to want.

5 responses to “Adding a Character”