All Your Past Are Belong to eBay (2) 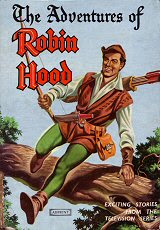 I undertook to say something about this, so I suppose I’d better…

It’s the Adventures of Robin Hood annual, published by Adprint in 1961 and based on the Richard Greene TV series. It was a typical children’s annual of its era; a yearly one-off publication for the Christmas market, in large format with shiny board covers, containing a mixture of text and picture stories.

The cover and interior art were by Ron Embleton, one of that great and often unrecognised generation of postwar illustrators whose distinctive, painted style gave a unique character to British children’s fiction of the day. Embleton, who died in 1988, was one of the best of them; his work ranged from The Trigan Empire to Penthouse’s Wicked Wanda, and it’s his art that can be seen under the end credits of every episode of the original Captain Scarlet TV series. 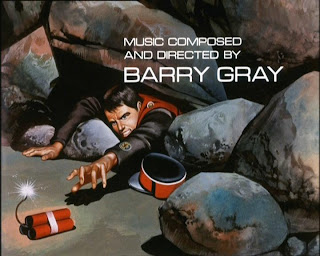 The story’s a short one. Last year I was searching online for a signed Ray Harryhausen print for a friend’s birthday. A damn-near fatal move. Hours were lost as I kept forgetting my original purpose and losing myself in the catalogue listings of dealers like The Book Palace, sellers of all things concerning comics, graphic novels and the related arts.

And what did I find on sale there but the original Ron Embleton painting for the cover of my Adventures of Robin Hood Annual, number five.

Now, I don’t believe in the business of people buying themselves some piece of goods and then informing a partner “That’s my Christmas present from you.” If ever there was an ultimate corruption of the Christmas spirit, there it is. So instead I did the proper, traditional thing, and begged and pestered for it.

I don’t know where the piece has been hiding for the past forty-seven years, but here’s where it lives now, above my study stairs, providing occasional inspiration and frequent escape: 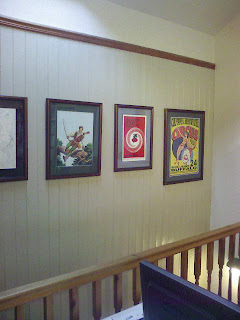 And yes, I located the Harryhausen print as well, so that year everyone was happy.

God bless us, every one.