Back to the Murder Rooms 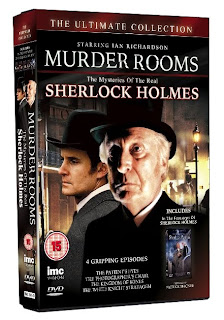 Is it Box Set or Boxed Set? One’s wrong but sounds right, the other’s right but… oh, never mind.

The main thing is that the series of TV-feature length Murder Rooms mysteries produced by BBC Films is finally getting a widescreen DVD release in the UK. Created by David Pirie out of a two-hour special that he’d made a couple of years before, the series features the young Arthur Conan Doyle (Charles Edwards) and his real-life mentor Dr Joseph Bell (Ian Richardson) in what amounted to a new and baggage-free take on the Watson-Holmes relationship. The set comes bundled with a 2002 Holmes documentary fronted by Patrick Macnee.

I imagine that the commercial thinking behind the release involves a gamble on the continuing Richie/Downey/Moffatt/Gatiss movie and TV euphoria… the individual shows have been around on DVD for a while but in a form I’ve always recommended avoiding. They were soft, muddy ‘fullscreen’ transfers, released when the 4:3 format was already on its last legs. The target market seemed to be technophobes and pensioners; the discs could be had for a fiver in Past Times shops and at one point were even given away with The Daily Express. The episodes were actually gorgeously lit and shot on crisp Super-16. They’d look great in Hi-Def or on Blu-Ray. I know ‘cos I was there. 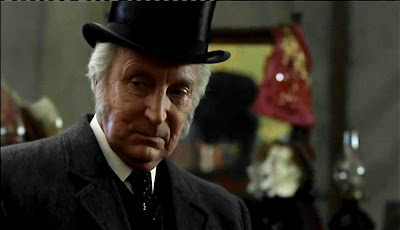 Let’s leap lightly over the fact that my Murder Rooms story and one of my (unrelated) novels share a title – I can explain how that happened some other time. But I loved the show, thought it showed the BBC at its best and had a driving concept that would have sustained it for a number of seasons.

I almost didn’t get to join the party. The BBC Films machinery was set up to deal with one-offs, not series, and funding was being released in stop-start increments. First the money for one script, then for another… then a green light to go ahead with the first couple of episodes… it was like the constant opening and shutting of a miser’s purse, a few coins reluctantly handed over every time. The original aim was, I believe, to film seven stories. I think mine was fifth in line but it got bumped up in the production order because I got my first draft in quickly, and with most of what it needed already in place. The purse slammed shut on four episodes but by then I was in.

It was a class production, handsomely done. The series producer was Alison Jackson, with Jamie Laurenson as development exec/script editor. My director was Simon Langton – Simon effing Smiley’s-People Pride-and-Prejudice Langton. I watched and learned. He shot with graceful, understated, old-school brilliance – terms that could equally describe Ian Richardson’s approach to an old-school magisterial role. The editor came on set one day to observe, and confided to me that he wanted to see how it was being done because the footage was pretty much falling together. 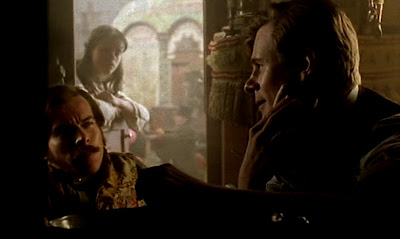 And it was a success – the notices were good, and so were the viewing figures. We geared up for second season that would kick off with those three unmade stories. I was asked for another, and put in my pitch. Ian Richardson shared his Joseph Bell research with me. David Pirie got a publishing deal.

The BBC pulled the plug. All plans were cancelled.

I was told some time after the event that this was most likely the outcome of a silent turf war between BBC Drama and BBC Films. The word went around that the show had been “too successful for the wrong department”. Co-producers The Television Company offered to take it over and finance it themselves, but were turned down. BBC Drama then announced a Hound of the Baskervilles with Australian actor Richard Roxburgh for screening the following year. My recall is that it was a serviceable retread of the familiar material, but nothing special. A disappointing changeling, for many. 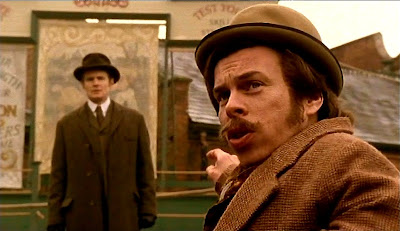 The new set won’t be out for a couple of weeks yet, so I can’t comment on its quality. Ignore the information on the Amazon sleeve pictures, they’re for the old versions; in an email this morning, a representative for distributors IMC told me, “I can confirm the new set with the four episodes will be in a 16:9 re-edited format.” Prior to this, if you wanted to get hold of widescreen DVDs you’d have to order from Sweden, the US, or Australia.

Personally, I’d like to see them reshown on the BBC’s HD channel. Not least because I might get a couple of bob out of it. But mainly for, you know, cultural reasons.

14 responses to “Back to the Murder Rooms”