Monday’s Chimera screening had a satisfying turnout and the evening ran smoothly, with great atmosphere. There was an audience flyer which included the entirety of a long Time Out review from 1991 that I hadn’t seen before (Fliss Coombes and Naomi Phillipson, handling publicity for Zenith and Anglia respectively, had sent me all the cuttings at the time, and to this day I’ve never looked at any of them). Dick Fiddy set the scene and then I did a very brief intro, probably recycling the same joke from nineteen years ago, and then off we went. Projection was excellent and the show looked and sounded better than I’ve ever seen it.

The source must have been a transmission master tape – it carried electronic cue dots, those tiny squares in the top right-hand corner of the image that give the Transmission Controller a minute’s warning of an impending commercial break. It was a call to action for everyone involved in the next three and a half minutes – network engineers, telecine operators, VTR department, continuity announcer. I started my career in the Presentation suite, and the sight of a cue dot takes me right back.

After the first couple of episodes, there was a short interval. I went up to the green room where Lawrence Gordon Clark had just arrived and was signing DVD sleeves. He hasn’t changed at all! And he was delighted with the evening, as was I. Especially since they gave us loads of beer and we were able to take it into the theatre for the second half. 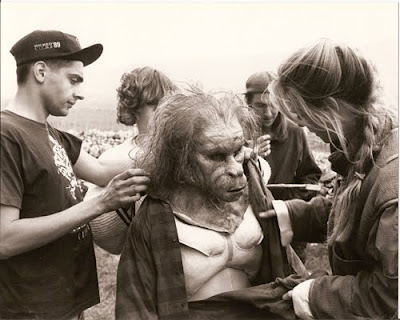 During the Q&A at the end, it emerged that 50% of the audience were seeing the show for the first time. Others in the course of the evening spoke up about its impact on them at an impressionable age. The consensus seemed to be that the show still holds its own, and that Nigel Hess’s melancholic score added a dimension of emotional complexity that was enhanced by theatrical presentation.

For my part, I think I actually appreciated it for the first time ever. Details I was unhappy with at the time kinda faded back into their proper places. It’s like some big public sculpture where I finally got far enough away to turn back and see it as others experienced it, as a whole. I was taken aback by the degree to which it reflected and challenged the ethos of the late 80s, that greed-driven, ruthless, and anti-society era, far more so than if we’d set out with an actual agenda to engage with ‘Thatcher’s Britain’.

I met up for the first time with Good Dog, blogger extraordinaire whose true identity I’ve now taken a blood oath to protect, lest it interfere with his ability to fight crime. Malcolm Brown, friend and co-worker from my old Granada Presentation days, had come into town to be there, as had my daughter and one of her pals, and with Lawrence we went into the bar afterwards and stayed until they chucked us out.

One response to “Bitch-slapped Bimbos and Silent Engineers (2)”