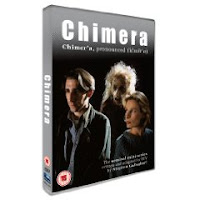 Read on and all will be explained. After a fashion. I promise.

But first a reminder that this coming Monday (July 5th, 2010) they’re screening all four episodes of Chimera at the BFI Southbank, formerly the National Film Theatre, followed by a Q&A with director Lawrence Gordon Clark and me.

The same day also sees the release of the Region 2 DVD. Sad news for the guy who’s been selling pirated copies on eBay for the past few years, good for anyone who’s been waiting for the real thing. And apparently some people have, which brightened my day when I heard it. When you work on a piece of TV drama you feel all revved-up and committed, like you’re carving a monument for the ages; a few weeks after it’s been on the air, it’s more like you wrote it on water.

And if you’re like me, you can’t look at your own stuff with any objectivity. All you can see are the flaws and lapses, the things that you wish you’d handled better or could go back and fix. The same things that many critics take for their raw material. Critics have a remit to entertain, like everyone else who writes for money, and if you rush to them looking for affirmation you’re looking in the wrong place.

So a writing career is a weird rollercoaster of elation and depression; the sheer joy of making a show, and the sense of gloom as it retreats into the past and the world’s population doesn’t line up to shake your hand and tearfully swear that what you wrote means more to them than the Bible. Followed by all the anxiety and ego involved in trying to set up another.

The fact is – and it’s taken me a long time to find this out – your real audience is a silent one. A great, shy beast that rarely breaks cover, and is largely unaware of your existence. Indifferent to it, even. Yours is a name that just passes in the credits like everyone else’s. What they care about is this moment in their lives where they were struck by what they saw and that they’ve remembered ever since.

To be the silent engineer of such a moment has a satisfaction to it. It’s something apart from fame. Especially since fame used to be the consequence of doing something remarkable, but now it’s not. It just means that some reality producer thinks that enough people will dislike you on sight to stick around to see you getting slapped.

I can remember a time before the VHS recorder when almost anything written for British TV had no afterlife at all. Repeats were despised by viewers and everything instantly became archive material, where the archive was seen as a wastebin of little value. That’s why so much stuff got wiped or junked, prints burned, negatives recycled for their silver. Copies might be made for export but they were usually of crappy quality, converted to local standards or scanned (badly) to 16mm. Only Lew Grade’s ITC shows and – perversely – some long-forgotten half-hour series of the 1950s still look good because they were shot on 35mm, in the way that Mathew Brady’s full-plate civil war photographs are sharper and contain more rich detail than your last-year’s holiday snaps.

Even when home recording had taken off, it was a while before TV’s back catalogue became commercial. Distributors assumed that retail and rental were only going to work for movies. Chimera had a brief VHS existence in an over-truncated ‘feature’ version edited for export and retitled by its American distributors as (God help us) Monkey Boy. Other than that and the pirate versions, it’s been unseen for most of the past couple of decades. At the time I shelled out for a couple of high-end tapes to make my own off-air copy, but it stayed on the shelf. I’m not in the habit of replaying my old stuff like some latter-day Norma Desmond.

But I got an advance copy of the two-disc set a couple of days ago, and I can give you a report. The transfer’s sharp and clean and looks great. ‘Contains moderate gore’. And as for the extras – far from being the silent engineer, I’m all over the DVD set like a clingy drunk.

There’s a reason for this. It was my first big show and I was all over the production like a clingy drunk, too. Lawrence and everyone on the team made me welcome, and I took full advantage. I showed up everywhere with my video camera and when production wrapped, I made off with all the stills, slides and presskits I could carry. Add the script of the novel’s 1985 radio adaptation and an on-camera interview that I did for a prescient Revelation Films around the time they were mastering their full-length Oktober release, and it’s no surprise if I keep bobbing up in the extras like the world’s biggest attention whore.

‘Tain’t so, honest. I’m more one for backing shyly into the limelight, protesting faintly as I go.