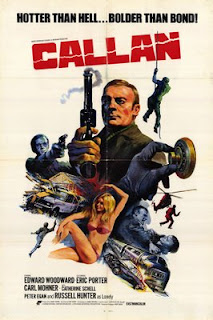 Blog follower dvikib asked this question in the comments to Rockford Redux, and I thought it worth giving some prominence because it’s another opportunity to direct attention to one of the best TV series the UK ever produced:

“I envy you that you were able to see the TV version of Callan. Amazon US recently added Callan: Set 1 (1970) for US DVD players. It’s actually the 3rd season April-June 1970. Do you think a yankee would be able to follow the episodes without having seen seasons 1 or 2? I’m not concerned about accents or British slang (which I love) but sometimes it’s hard to jump into the middle of a long running series. I realize the film quality might not be the best but I would love to see that character. Any thoughts would be much appreciated!”

When you say “the TV version” I’m inferring from your choice of words that you’ve maybe seen Callan: the Movie, which is the theatrical feature version of A Magnum for Schneider, which was the TV play from which the Callan series sprang… if you have then the boxed set will make perfect sense, and if you haven’t I reckon you’ll probably be ok with the boxed set anyway. They’re pretty much standalone stories, and their ‘world’ is fairly self-explanatory.

And if you haven’t seen the movie… well, there you go. One for your wish list.

The picture quality of the boxed set is that of old colour videotape — hardly feature quality, but way better than the low-grade 16mm telerecordings that survive of the earlier series.

I have to say that the image at the top of this post is hardly representative of the show’s gritty, downbeat tone, which is far closer to that of The Spy Who Came in from the Cold than to Bond. In fact, if you know the show at all, it’s kinda hilarious.